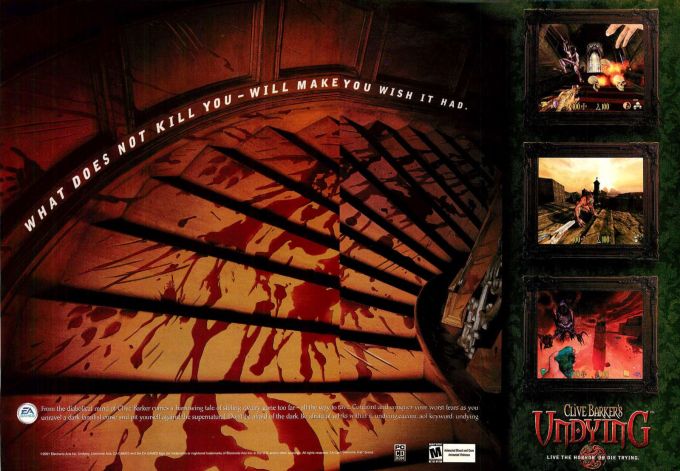 Undying’s ad from 2001 captures a bit of the haunted house vibe that the Covenant family, in their madness, have created. And you’re just in time for dinner.

DreamWorks Interactive is probably not a name you might be familiar with when it comes to horror. Founded in 1995 as a joint venture between the filmmaking studio, DreamWorks, and the software giant, Microsoft, it was their cooperative bid to get in on the video gaming tidal wave that was pushing everyone to buy 3D cards in the 90s as well minting an upstart like Sony as the newest player on the block. This was a heady time of technological adrenaline when CD-ROMs promised a glittering marriage of Hollywood storytelling and bleeding edge interactivity.

But DreamWorks Interactive were also the developers responsible for the FPS hit Medal of Honor on the PS1 which was published by Electronic Arts in 1999 and would go on as a solid series before ending its run with the issue-plagued Warfighter in 2012.  Today, the studio is still around — now known by its latest name as DICE Los Angeles as a part of EA DICE (the studio behind the Battlefield series) — and they’re no longer making horror games.

On some level, it would be a bit unusual to see Electronic Arts publish something like Undying today. Most of the time, EA seems content to hold court in its three piece suit sewn with the names of studios and designers that have helped write its history, growing more careful, steely eyed, and more than a little cautious in tackling new horizons over the years.

Yet it wasn’t always this way. Twenty or thirty years earlier, it dressed retail shelves with a dizzying diversity of titles ranging from Little Computer People to Command & Conquer. It dabbled, experimented, and promoted itself with the voice of its products, first on PCs ranging from IBM compatibles to the Commodore Amiga. Over the decades, it and its stable of studios have created enough hits to keep its engine stoked and moving forward from its humble beginnings in the 80s when the PC market was young and founder, Trip Hawkin, positioned the company to dabble in everything from music composition to, well, games. And back in 2001, EA took that kind of risk with Clive Barker’s Undying. 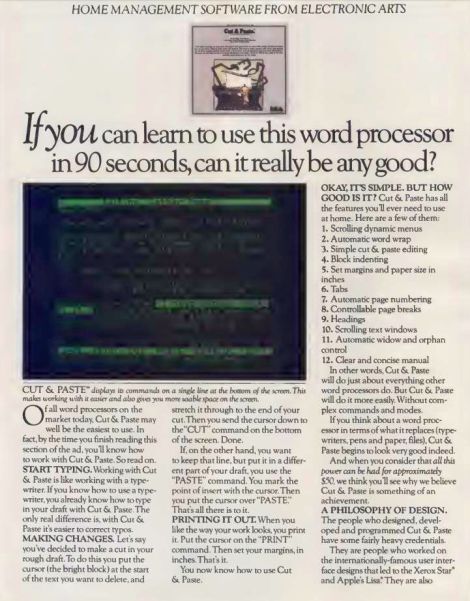 Yes, it’s true. Electronic Arts even made a word processor once upon a time.

The story behind Undying starts in 1899, when Jeremiah Covenant and his four siblings as children discover an old book at their family estate on the Isle of Standing Stones. As a game, they followed the ritual it outlined, unknowingly unleashing a dark power that cursed them. Their father, who had taken to restoring the old estate and who was obsessed with excavating the Standing Stones near it, sought to find answers to the mystery before death overtook his efforts.

Now, more than twenty years later and on his deathbed, Jeremiah Covenant is alone, his siblings having already succumbed to madness, death, or simply disappearing. Young Lisbeth’s gothic descent away from society and into biting the help while spending time among the dead at the family cemetery. Aaron’s nightmarish paintings. Bethany’s obsession with the occult and self-proclaimed “magi” of the day. Rebellious “hellion” Ambrose getting into greater bouts of trouble with the local law before disappearing, leaving Jeremiah the last of his family.

Fearing that they are the victims of the dreadful ritual they had performed years earlier, and himself suffering from nightmares that whisper terrifying portents into his waking hours, Jeremiah reaches out to his wartime friend and occult professional, Patrick Galloway. He hopes that Galloway will be able to find away to reverse what was done — and to finally lay the curse to rest. But his family have other ideas. 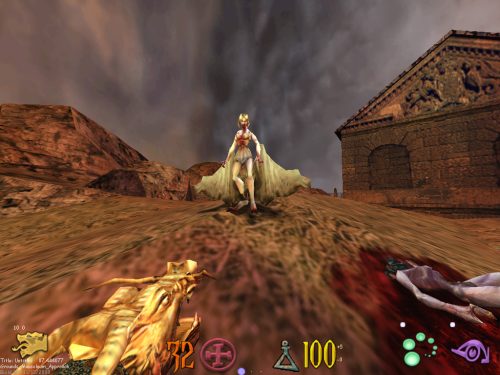 Lizbeth is not happy to see Galloway. In this screenshot, you can see the Tibetan War Cannon’s snout on the bottom left, which is happy to see Lizbeth…back to the afterlife. (screenshot courtesy of Clive Barker’s webpage)

A lot of the preliminary setting was fleshed out with a small booklet that acted as an excerpt of Jeremiah Covenant’s journal, fleshing out each family member and detailing the spiraling darkness that infected their family. It’s a fantastic piece of fiction included with the game in a time when physical packaging and extras like the journal were considered part of the price.

As for the game itself, Clive Barker was actually brought in seven months after it had begun production according to this archived interview.  The game even had a completely different protagonist — Count Magnus Wolfram — who had “superhuman strength and a bald head adorned with tattoos”. According to the piece:

“Producer Brady Bell said, “In one of our first meetings, Clive asked us, ‘Who here identifies with this character? How many of you know a count?’ and nobody could answer.” A heavy revamp led to a new leading man, Patrick Galloway, who is more of an everyman with a touch of sexiness. Barker added, “I wanted the main character to be sexy. As a gay man, I wanted a hero I would sleep with.”

Galloway, in the game, isn’t so much a raging monolith of muscle and arcane prowess. He comes across more as an investigator of the occult, a Ghostbuster in the 1920s who served in the Great War and now has to confront the horror of the Covenant Estate and the parallel world that lies just beside it.

Sexy hero guy Patrick Galloway, on the left with the mystic Gel’ziabar stone around his neck, and ailing friend, Jeremiah, on the bed. (screenshot courtesy of Clive Barker’s webpage)

But that’s only one of the changes that Barker brought to the game that bears his name. His creative powers also fleshed out each of the antagonists from Aaron to Lizbeth, mixing sexy horror with brooding terror. He was excited about working with an opportunity like this because, when it came to games:

“I’ve become increasingly aware that this is the world of the future. It’s one of the places people will find stories. Working on games is a dream come true; potentially, every time you play a game, it’s a different experience.” The thoughts of gaming even pervade his other work. “I just finished a book, and several times in the narrative I thought about games. There are points where characters have to make decisions, but in gaming there are several different possibilities. In games, I can have one tree and give it several different branches that are all fruitful.”

On this note, Undying’s atmosphere is easily one of its best features. There were times when I’d just stare at the detail created in this strange, haunted reality. It is an FPS, everything is in first-person, but instead of running and gunning my way through to the end, it does that while managing to create tender moments of chilling horror. Not so much the jump-scare kind with monster closets, more like a cloying descent into madness and decay that you’re witnessing around you as reality itself goes to war against Galloways’ senses.

Galloway will find weapons to help him, all of them drawing from the period’s mix of occult what-ifs (like that Tibetan War Cannon) and its hangover following the Great War. He’ll also be able to cast spells (thanks to an occult item that he owns, the Gel’ziabar Stone) and improve his ability through the discovery of special glyphs, so the usual power-up tropes are also here to give the player a fighting chance. And a few of the siblings, in their own terrifying ways, provide the boss battles that check your progress to the ultimate confrontation. 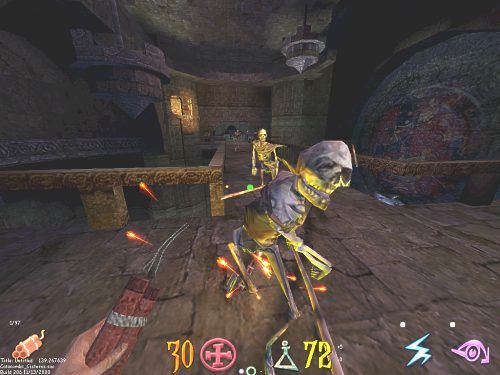 There are a lot of different enemies in the game, the undead being only a few of them, as things quickly spiral out of control. (screenshot courtesy of Clive Barker’s webpage)

In the end, it’s revealed that it was Jeremiah all along that wanted the power of a mysterious Undying King that had been sealed away on the Island of Standing Stones. He had faked his death at the hands of his siblings earlier in the game to act as a catalyst for Galloway’s quest and returns to reveal his plans for the world and how he will use the power of the Undying King for his own ends. Galloway decapitates Jeremiah with a powerful Scythe he had attained during the adventure which destroys the seal holding the Undying King back, allowing him to enter the world for a final battle to the end.

Undying was apparently expected to the be the first in a series because during the ending, after falling from the Island of Standing Stones, a mysterious figure fishes him from the water and takes the Gel’ziabar Stone hanging around his neck cryptically saying that he is not done yet.

Galloway’s voiceover goes on to talk about the mysterious Brotherhood of St. George whose ruined monastery had also resided near the Covenant Estate, and which he had explored in the game, and that there were many other monasteries elsewhere likely protecting similar gates as that found on the Island of Standing Stones.

Unfortunately, that was never to be. Undying sold poorly according to this archived bit from the now-defunct gaming portal, Voodoo Extreme, by the producer, Brady “OJ” Bell. According to Bell:

Concrete info for you guys..

For this fan, I really enjoyed the game. It would have been really awesome to see Galloway on a globetrotting, occult adventure in the 1920s, tapping into something of a Cthulhu-esque vibe or simply reveling in the legends and myths of an era when the world wasn’t yet too small to have “seen everything”. There was a lot of untapped potential there that, sadly, won’t ever be realized.

As for the author, filmmaker, painter, and creative maelstrom that is Clive Barker, he went back to gaming a few years alter with Jericho from Mercury Steam that released in 2007. Like Undying, it was praised for the world building and creeping horror that its atmosphere, crafted by Barker, embraced. Unlike Undying, however, the gameplay elements weren’t as well regarded aside from its interesting squad system.

Undying can be found today on sites like GOG.com where it’s still highly regarded by many players. As for EA, it’s still doing what it does best even if it’s no longer playing around with new properties like Undying. Still, one can’t help wonder what might’ve been. And whether Clive Barker might put his name on another game.