I’ll throw this out first: L.A. Noire isn’t Grand Theft Auto. Even though it has the Rockstar label on it, if you’re going to jump into the game wanting that, you’ll be wasting your money.

Instead, Team Bondi have spent seven years in crafting L.A. Noire to do something different with its city-sized sandbox. As a detective thriller, it’s focused more on telling a story, grilling possible perps, and finding clues than about jumping from street races to shootouts. There’s still some of that, but it plays second fiddle to what Team Bondi have meticulously created with every sneering grin suspects will leer at you with. This isn’t a game for the run ‘n gun crowd. 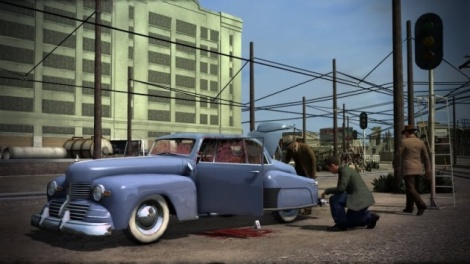 Asking questions and poking around for clues is what L.A. Noire is all about. You also get to shoot holes in the occasional bad guy, but that's more of a side thing.

Set in 1947, players hit the pavement of Los Angeles as the idealistic Cole Phelps. A WW2 veteran, he starts off as a beat cop which serves as a tutorial on the tools needed to survive Los Angeles’ clue-filled sandbox. After a stint as a boy in blue, he’ll graduate to detective and start hitting the real meat of the game – cases that range from murder, arson, and exploring the underground drug trade. Flashbacks keying in moments from his life on the front lines in the Pacific flesh out his past in pieces and newspapers give the player a bird’s eye perspective on events happening elsewhere in the backdrop.

The city of Los Angeles feels as if it were lifted straight from its post-war place in history, right down to the landmarks and the meticulously detailed indoors of places such as the Los Angeles County Museum’s art covered walls to the street banners extolling drivers in their huge cars to “Drive Safely”. A colorful mix of characters cut down on the clone effect on the streets along with a vast collection of cars filling them. Storefronts, painted ads on brick building walls, and music fill a version of the City of Angels that could feel at home in a film such as L.A. Confidential or Chinatown.

Noire also has the feel of an old school adventure game, the kind where you go from scene to scene in filling your inventory with the things you need to get ahead. Instead of assorted odds and ends, however, Phelps’ notebook fills in with clues and locations as he moves through his investigation. Every piece also provides ammo in determining whether or not someone is lying through their smirking lips, and it’s through these same faces that L.A. Noire’s world shines through. There’s nothing quite like it in any other game. 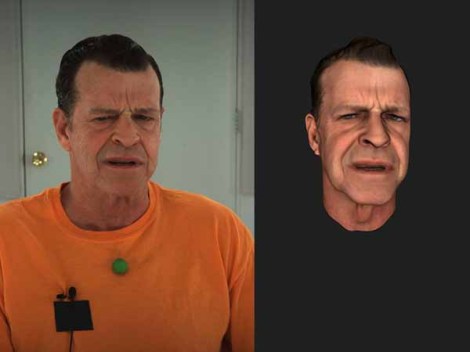 The actors did a lot more than just lend their voices to their characters.

Instead of bobbing heads and hand gestures, or a clever play with animated textures, seeing a suspect’s mug realistically mold itself into a wince, frown, and a grandfatherly smile as cheeks raise up and eyes wander the screen adds an undeniable impact to the dialogue. It’s not just for looks, either. It’s a language. Successfully reading these digitized mug shots and linking them to whatever clues Phelps has in his notebook can lead an investigation to a quick wrap-up or close off certain avenues making it harder to piece a case together, even failing it.

But clues found elsewhere, or visiting certain suspects first before moving on to another location, can also open up other angles. Phelps also has “intuition points” that can eliminate certain clues or questions to make it easier to get to where he needs to be with a person of interest. Points are earned almost every time Phelps “levels” in the game, for a maximum of five points at any time. Unlike Quantic Dreams’ Heavy Rain, however, failing a case won’t keep the game moving forward. Replaying the case either from the last automatic save or from the very start are the only options if you hit a complete dead end which can easily happen, especially if you utterly botch an interrogation.

This also forces the player to make choices that can go against what Phelps might do, especially when certain cases are strongly politicized towards what is better for the department and not necessarily for the suspects in question. Noire doesn’t often paint the player into too many of these moral corners, but it does remind you that it is telling only one version of the story arc  – as long as you can forgive some of its holes.

The characters are, without question, flush with plenty of personality – some clearly appreciate Phelps being around, others will have you asking whether their smiles are genuine or hiding a secret vendetta of their own that you have unwittingly helped along the way. The cases, in particular, start out innocently enough before descending into brutally bare filth and grime. Noire earns its Mature label for being utterly frank with its subject matter, especially when the corpses begin piling up and you have to examine a few of them yourself by getting up close and personal regardless of what state they’re in. 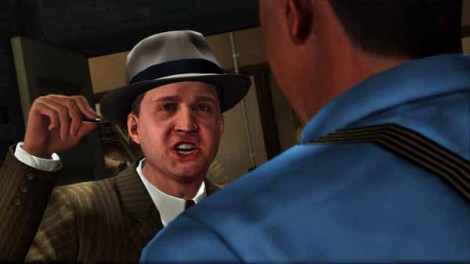 An innocent question can sometimes set Phelps off more often than it does the suspect.

However, the way the story sometimes handles its own characters can leave marks on it’s polished digital pavement. For example, one character eventually falls into a romantic tryst, but this feels as if comes straight out from left field when it happens. Being unable to influence some of their decisions regarding events like these can feel as if the game is along more of the lines of an interactive movie than anything else, yet most of the experience isn’t quite as binding when balanced against the relative openness of the cases and the city itself.

There is also a sense of repetition here, but that comes with the territory. Still, the worst offender in this department was the Homicide desk where every case seemed to be the same thing but only with different suspects. After the second case, you’d think something wasn’t quite right but Homicide stretches this out for awhile longer making some what of what is already repetitive by design – the search for clues and following interrogations – magnified on the case level.

Another thing that you really don’t have any control over is how Phelps can suddenly blurt out accusations in fury over simply doubting someone’s word on an event. There’s a temper under that fedora and it can unintentionally make you wonder if Phelps has a secret chip on his shoulder the size of the Broadway.

But it’s also hard to ignore that with so much city, there really isn’t that much to do inside of it aside from driving from one lead to the next or in following up on one of a finite number of street crimes. After seemingly busting every criminal in the city, there really wasn’t a lot more to look forward to other than gape at the detail layering every block. Phelps must lead a very boring life outside of the game, or L.A. just doesn’t have a whole lot of crime to speak of outside of the major cases. 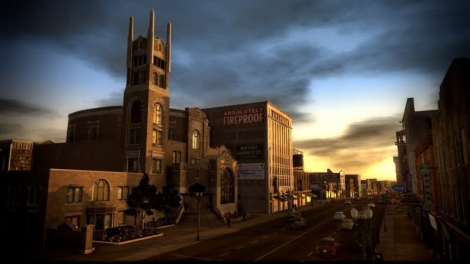 Leveling Phelps also felt shortchanged since I managed to max him out at 20, thanks in part to tackling all of those street crimes and using intuition points as little as possible, well before reaching the end of the game. Once making it there, there aren’t anymore opportunities to earn those intuition points meaning that you’ll either have to be very good at when you use them or just be very patient in replaying certain parts of the case to figure things out on your own.

Control-wise, most every car in the game outside of the big trucks handle like something out of today’s world with tight turns and ease of steering. If you don’t want to drive somewhere, you can always make your partner take you to where to want to go. Fist fighting is pretty straightforward with solid controls turning Phelps into a primo pugilist, and shooting will be familiar to anyone coming in from Grand Theft Auto IV with optional auto aim to help finesse things. Like I said earlier, there is action in this game especially with the optional street crime events, but if they’re still not your cup of joe, failing these a few times will prompt the game to ask whether or not you want to just skip them making it accessible to anyone who is just in it for the story. Running over civilians, even if it is while chasing a bad guy, is definitely frowned upon as a badge carrying member of the ‘good’ guys.

L.A. Noire is as groundbreaking a game as Quantic Dreams’ Heavy Rain or Access Software’s classic, Under a Killing Moon, in the sense that technology has been used to dramatically invite players into experiencing an adventure game outside of an inventory and a backdrop of stiff characters. Episodic cases lead up to a solid climax that is a little on the thin side making the journey the only grist that matters, yet when the final curtain fell across this hardboiled drama, it was hard to shrug away thinking that it was also the beginning of a beautiful series.

One response to “L.A. Noire”