Fatal Labyrinth got not one, not two, but three whole pages dedicated to wooing RPG fans over to the system. It also shared page space with three other RPGs: Phantasy Stars II and III and the action RPG, Sword of Vermilion. The message the ad wanted to send out was clear — if you want to play fun RPGs, the Sega Genesis had your ticket.

Sega was running hot by 1991 thanks to efforts by Tom Kalinske (hired the year before) and his crack team at Sega of America. That year, the Sega Genesis actually outsold the SNES by a margin of 2:1 (the SNES landed in North America in August that year) thanks to the Sega’s head start in 1988 and a large library of ready-to-play titles by the time the holidays rolled around. And they weren’t done letting up as you can guess from looking at the 1991 ad above.

One of the things that stood out in the late 80s and early 90s for heavyweights Nintendo and Sega was that their gaming libraries were about as eclectic as your app store on mobiles today. Everyone wanted to hit something that would go viral in those days and grab a piece of the quickly expanding pie that the Houses of Mario and Sonic were building. Even PC titles waded in with seemingly impossible ports of deeply strategic titles with a taste of Koei’s Romance of the Three Kingdoms hitting the NES or RTS games like Technosoft’s Herzog Zwei on the Sega Genesis appearing in ’89 years before Westwood’s iconic Dune II did. 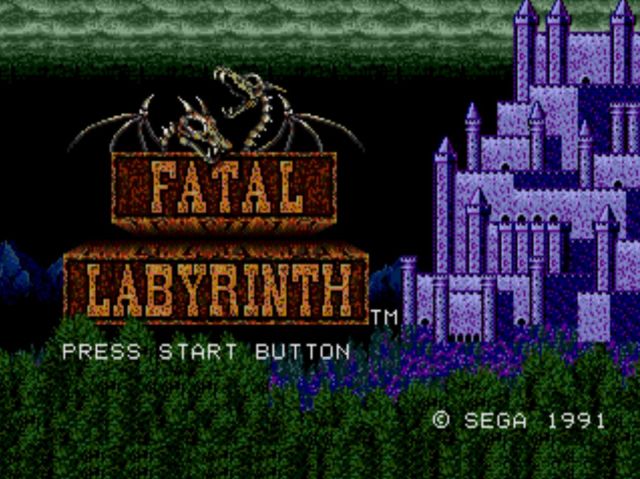 Dragonia castle has risen up again and the Holy Goblet has been stolen. It’s up to a hero armed with only a knife to save the day! Which doesn’t make a hell of a lot of sense.

The Genesis fielded a ton of games over its lifetime quickly outpacing the relatively mediocre popularity of their Master System in North America thanks largely to a much more open relationship with third-party developers, a number of whom were chafing under Nintendo’s strict guidelines. Not every game given leave was a wild success, some could be little more than shovelware, but they added a lot of personality to each system’s respective libraries.

Roguelike RPGs weren’t particularly popular on either system — RPGs brought over from Japan or ported from Western studios often used traditional, set dungeons, planned down to the last door frame. That made 1990’s Fatal Labyrinth something of a standout amidst the Genesis’ collection of adventures.

Fatal Labyrinth was developed at Sega by Hirokazu Yasuhara who would go on to help plan a few levels for Sega’s famous Blue Bomber, Sonic, and years later, involve himself with Naughty Dog on Uncharted before being finally hired in at Nintendo a few years later. It came to Japan first in 1990, and then a few months later, to North America and Europe in 1991.

The player, named Trykaar in the game instructions, starts in their tiny village where they can talk to NPCs by bumping into them. At first, the village elder doesn’t want him to go, but eventually, by trying to leave, relents. This also changes the dialogue of the villagers though it doesn’t encourage them to give you something more than a butter knife to go and slay a dragon with. Sheesh.

It wasn’t quite as flashy or as memorable as Sega’s uber-famous RPG series, Phantasy Star (the first was on the Master System and II – IV were on the Genesis/Mega Drive), but it was an interesting slice of dungeoneering in its own way. The graphics weren’t that great and the music could lead to you pouring wax into your ears to dull the repetitive pain, but it did bring something that not many consoles had seen to the table with its roguelike trappings.

The story is pretty simple – Dragonia castle has arisen from the earth once again and an evil dragon has come forth stealing away the Holy Goblet. It’s up to you to venture into this dungeon armed with little more than the shirt on your back and a knife to somehow find a way to get it back.

The mighty RNG gods didn’t smile on me starting out… 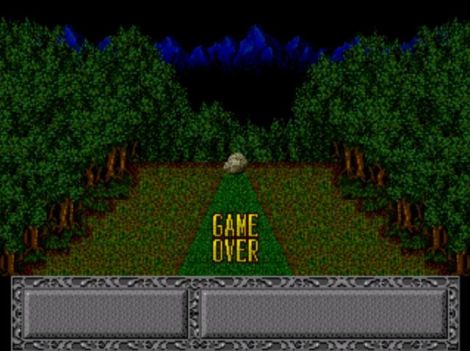 …which quickly led to this.

Fatal Labyrinth is notoriously hard. Depending on its randomness, you could either start out in a room filled with weapons to give you a fighting chance or monsters that kill you dead even before you move from the first room. In many ways, Fatal Labyrinth is a 16-bit version of the famous roguelikes of years past on the PC with hallways leading to rooms that may or may not be filled with monsters and gear.

Controlling combat was easy stuff — you simply move in the direction of the enemy and your hero will automatically hit them with whatever they are equipped with, much like Nihon Falcom’s Adol did in Ys I and II with his “bump” fighting in 1987 and ’88 respectively. But there were a few key differences.

The interface system managing inventory and gear was simple to grasp. Categories were laid out along the top and a simple push of the button led me down each tree. From here, I can see how useless my knife is.

For one, the game used a tile-based movement scheme. You could only move in one of the four main cardinal directions, tile by tile. And as you moved, so did the monsters at varying speeds. Sometimes a monster would move for every two tiles you did. Other monsters would move along just as quickly.  Other monsters would simply stay put, sometimes blocking the way to another room.

Monsters also came in a variety and could be brutal even early on. Wizards could put you to sleep, enemy ninjas could hurl stars at you from a distance, or you could fall in a pit and end up trapped on a random floor until you found the way out. Fatal Labyrinth lived up to its name many times over.

Dragonia was made up of 30 floors of mayhem and death. Finding the stairs was only part of the challenge.

The main goal for each floor was to find the stairs to the next one, ultimately making it through the maze to confront the final boss and rescue the Holy Goblet to save the world. But the path was never clear. Entering a level surrounded you with a “fog of war” — you could only see your immediate room, but not necessarily the hallways leading from it until you were close enough. Even then, the game would sometimes hide these passages behind secret doors that you needed to search for, leaving you to bash the buttons on your controller until it revealed itself as you scoured the area.

There was also the matter of getting hungry. The bottom left hand corner held your stats including how much food you had left before hunger started taking a toll on your hit points. Like any new armor, weapons, special scrolls, magic rings, potions, and bows that you will need to equip yourself with, you not only need to search for better gear but the occasional giant roast on a bone. Gold doesn’t serve a purpose other than to determine how nice a funeral — complete with funeral attendees — you get when you do die. Which will happen. A lot.

Apparently gold effects how nice your funeral is. This time, I had people attend. That’s nice to see, but c’mon everyone…if you wanted me to do better, you could have given me more than a knife and my ratty clothes to start with.

Leveling was automatic and there was no clear indicator of how far you were from the next. Mostly it was simply defeat so many monsters and you not only level up, you also get a new title as you graduate from “Beginner” and into loftier ranks like Leader or Battleman. It doesn’t necessarily make you stronger, the game is mostly gear driven, but it does give you valuable added HP which alsoslowly regenerates as you move around. That is, unless you get hungry.

Monsters come in a wide variety from simple slimes to fiery trees, robot spheres, wizards, eyes in the floor, shinobi, and ultimately, the evil dragon awaiting you atop the titanic keep. Attacks are also as varied such as being hit with spells that make you “dance” (these mix up your direction controls), try to put you to sleep, or simple physical ones that smash into you like a falling tower. A small mercy was that the player could continue from certain levels depending on how far they’ve gotten.

Well, this isn’t good. Get that gravestone ready! Enemies will actually try and follow you through the hallways which can result in some messy situations like this one.

On finishing the game, players got to see a nice ending clip seen from a top-down perspective of the player “flying” across the land thanks to glider wings they received after defeating the dragon.

Fatal Labyrinth was pretty hardcore for the time especially when compared to other RPGs. Weapon balance was accentuated — swords weren’t as powerful as axes, but they hit more often, for example, and items could determine your success or failure more often than not. Inventory was limited but you could drop items on the ground where they would stay if you changed your mind, though there’s no backtracking to previous levels so anything left behind stays that way. You could even throw items at enemies if you so chose.

It’s time to fly home for a well deserved rest.

Items and gear were also unidentified on picking them up, showing up as ?????? in their description box until you actually used or equipped them. At the same time, some items are actually cursed and may do more damage to the player instead just to add a bit more spice to the challenge.

Fatal Labyrinth was later included as part of a number of collections, such as Sonic’s Ultimate Genesis Collection released for the PS3 and the Xbox 360 in 2009, and is also up for digital download on services such as Steam.

While it wasn’t quite as popular as some of the Genesis’ other RPGs, Fatal Labyrinth’s unique challenge has made it one of Sega’s bold experiments for the time in doing what they could to make the case for the Genesis as a hardcore role-playing machine. It was a different kind of RPG for the Sega Genesis, a daring title that sought to bring a new experience to consoles in a time when anything seemed possible.

2 responses to “Endless mazes from the past – Fatal Labyrinth”