Konami continued their NA marketing run using live models, this time featuring two muscled dudes standing in as our heroes (one of these guys must be Bill with dyed hair, I guess). The Japanese version…

Konami’s designers didn’t waste much time in coming up with a sequel to 1987’s arcade hit, Contra, releasing Super Contra in 1988 roughly a year later. Even the story distributed with the arcade flyer made note of that by setting the story a year after the events of the first game.

The evil mega alien mastermind, Red Falcon, was seemingly defeated, but it looks like his organization has survived and is ready to make another bid for world domination unless our heroes, Bill and Lance, can step up to the plate once more. That’s the arcade story and it was even illustrated in the game’s attract mode complete with voice samples and animation. The NES port got another wall of text that significantly added a lot more crazy to the mission briefing. 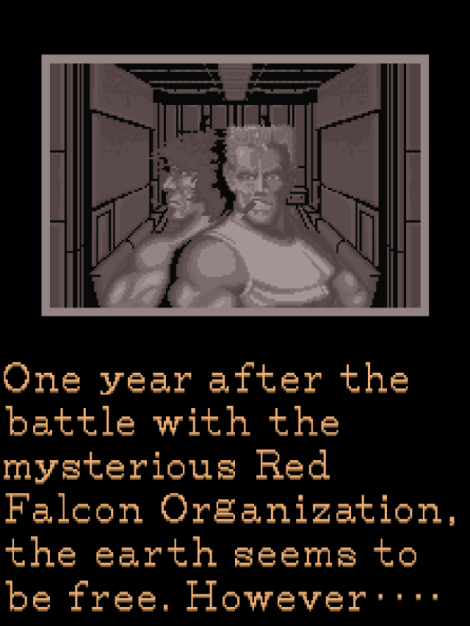 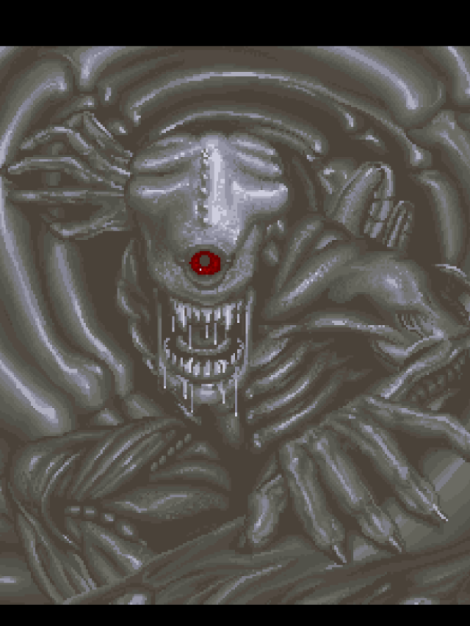 …complete with Gigeresque aliens. A later stage would be swarming with these coming at you, doing the “Alien scream” as they were blown away en masse by our heroes.

Depending on how your arcade operator was feeling at the time, cranking up the volume on the arcade cabinet for Super Contra made the thunder and lightning in the first stage smash the senses out of you. The boss helicopter at the end didn’t just explode as it died — it shook the arcade with its death knell thanks to those speakers. And the soundtrack? Amazing.

There were also slight differences between the arcade versions depending on which region you were in. This time around, instead of being renamed (as Contra was in the UK where it was renamed Gryzor) en masse, the Super Contra name was retained, functionally, were almost identical. One interesting difference lay in what happened after you “won” the game. The Japanese version looped back to the start raising the difficulty and removing continues so if you used up all of your lives, that was finally it. The versions outside of Japan, like the ones for North America, ended after the credit scroll.

When it came over to the NES, both the fiction and gameplay received creative buffs all around. The NES port, simply called Super C, even gave call names to our heroes. They’re Mad Dog (Bill) and Scorpion (Lance) and despite exploding Red Falcon’s heart at the end of the first game, he’s back and has recruited more alien bad guys to help him out like Jagger Froid from the Black Hole Galaxy and the Babalu Destructoid Mechanism. Whoever did the work in fluffing the fiction did a pretty amazing job in pushing the weird factor for this and a few other of Konami’s NES titles with an attitude aimed at what was likely Nintendo’s younger demographic.

In coming over to certain PAL regions (such as Germany) in 1992, it was called Probotector II: Return of the Evil Forces and just like Contra’s previous homecoming there (which was just called Probotector), had undergone a few character redesigns to make enemies look more robotic to meet certain content guidelines laid down by countries such as Germany at the time.

Super Contra was a run ‘n gun just like its predecessor with better graphics, sound effects, music, and flashy action effects. One major difference was that instead of the 3D hallway bases that were part of the first game, these were replaced with top-down, vertically scrolling battlefields allowing for full, eight-way movement as you battled against new challenges like stationary turrets and alien mouths coming out of the floor.

The home port of the game for the NES featured three new stages — a number of ports on the NES were embellished in the same way, adding stages, characters, or other elements not found in the arcade version — for a total of eight. The boss at the end of the arcade version, for example, wasn’t the final boss in the NES port, and a number of changes were also made throughout the game to distinguish it with new challenges.

…to the stages themselves (Jagger Froid’s Fruit-of-theDoom Defense Line! Wat!).

The port was also just as tough as the arcade version and the first game with limited continues (continuing your game also reset your score). Even the famous Konami Code which gave a player 30 lives to work with in the first game was changed to a different code here. And that only gave the player 10 extra lives to save the universe with.

The NES port also changed the admittedly useless “spinning fireball” gun from the first game into something a bit cooler like a fireball gun that shot exploding fireballs and could be charged up to fire one that blasted through weaker enemies before hitting something more powerful. 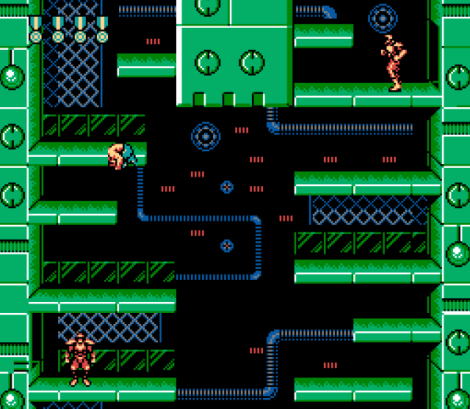 This vertically scrolling base stage wasn’t in the arcade version but was added to the NES port all the same featuring new challenges like soldiers jumping down to tricky turrets on the walls and a unique boss at the end. And yes, even though there’s a floor down there, falling off the edge of the screen would still automatically kill you (I’m looking at you Castlevania).

The NES version also replicated the top-down base levels from the arcade with an impressive degree of detail albeit without the “Shell” super (in the arcade, if you picked it up and hit the jump button, it would destroy or severely damage everything onscreen). Weapon capsules would still fly into view allowing players to shoot them, sometimes releasing a flashing falcon emblem that would destroy everything on screen when touched.

PC versions of Super Contra based on the arcade version (although they retained the NES naming convention, Super C) were released for two rising stars — the Commodore Amiga and the IBM PC.

Like its predecessor, Super Contra also saw a lot of life after its arcade and NES days. It popped up on Xbox Live Arcade for the X360 in 2007. The NES version showed up in 2002’s Konami Collectors’ Series. Probotector 2 also showed up on Nintendo’s Virtual Console for European and Australian audiences later. And according to what I’ve read, the mobile version in 2008 was also noteworthy because not only did it also include the extra stages from the NES port, it updated everything with the arcade visuals of the original including the story intro. This version can also be found on the 3DS’ Virtual Console nowadays.

Super Contra was an amazing followup to a solid game and its NES port would do what Konami would later continue with other games brought over from the arcade, adding new challenges and tweaks to make them stand out and amaze a new audience of gamers the world over. The NES version was fantastic but the arcade version is just as memorable…especially when you discover that you have the arcade to yourself with the volume cranked up.