Released in 1984, Timeship was based on the 1983 PnP version of Yaquinto’s game of the same name. Apple II computers were a hugely popular choice for many developers back in the day until they were slowly edged out in the late 80s thanks to more economical alternatives like the Commodore 64 as well as moving aside for all of those IBM PCs cloning their way into everyone’s homes.

Time travel has always been a tricky subject for any system to tackle from PnP RPG systems to computer games. Many often used it as a simplified wrapper to wow players with anachronistic action set pieces such as in Konami’s thumb blistering Time Pilot from 1982. Though over the years, others such as Infocom and Legend Entertainment would also take more cerebral approaches to the topic with titles such as Trinity in 1986 and Timequest, in 1991, respectively. But Yaquinto also wanted to play time twister and it did so with a number of entries into the genre with which it would try to build a beachhead on the shores of the growing PnP craze of the time.

According to this entry over at Boardgamegeek, Yaquinto Publications was a company (part of the Robert Yaquinto Printing Company of Dallas which was founded in 1961) that wanted to specialize in wargames and were renowned for the quality of the included materials. Outside of wargames, they dabbled with other titles such as Market Madness (a stock market game) to an adaptation of the Dallas television show.

The early 80s also saw their attempt to break into the quickly expanding RPG tabletop market spearheaded by TSR’s explosive growth there. Their biggest series kicked off in 1982 with the “Man, Myth, and Magic” system by Herbie Brennan covering historical periods ranging from 4000 B.C. to 1000 A.D. with each module tackling a scenario set around a particular event or collection of events.

The system, from what I was able to gather from poking around the ‘net, was pretty open to some wild combinations of party characters. You could tool around ancient Egypt, for example, with a party made up of a Roman legionnaire, African witch doctor, or a martial artist from the Orient.

This craziness was explained by Tony, over at the Cryptic Archivist who took a deeper look at the system in question describing how both your nationality and class were randomly determined by die rolls. This also created some notable problems that more serious players might have issues with such as the party mix above, but he also notes a few issues with the mechanics themselves. The bottom line was that while the system was imaginative and held the potential for some awesome scenarios, it had some…interesting shortcomings. Yet the idea of rubbing shoulders with historical personages and rummaging around their places in history for dungeon loot certainly seemed intriguing.

As the computer revolution also took off, jumping into that arena with a ready-made system that seemed perfect for PCs was almost a no-brainer, especially given the wide berth given over to war games in general during the early 80s with tabletop luminaries like Avalon Hill jumping onto Apples, Ataris, and Commodores everywhere. Why not RPGs and adventures, too? That was a question repeatedly answered by many developers such as Sir-Tech with Wizardry, Brian Fargo with The Demon’s Forge, Richard Garriott with Ultima, and SSI with Questron among scores of others.

Having Yaquinto’s newest RPG, Timeship, go over to PCs made a lot of sense. Unfortunately, that’s not often an instant recipe to success.

C. A . Hastings over at the massive tabletop RPG forum, RPG.net, reviewed a copy of Timeship (the tabletop version) that he managed to snag. In a nutshell, he discovered that the game has some interesting ideas but stumbles on a number of things that were hard to overlook, namely the approach taken to describe the rules and the rules themselves which could sometimes be a bit confusing.

Yaquinto and Herbie Brennan apparently pooled the lessons learned from their “Man, Myth, and Magic” series into Timeship. Instead of having separate scenarios, now players could look forward to a unifying backdrop.

The idea behind Timeship is that the game is really a translated set of instructions describing the process by which players can journey into the past to complete different adventures. Not characters, actual players (with a few tweaks), kind of like how Ultima “transports” the player to the world of Britannia where they become the Avatar and where Lord British is also really from Earth. In the tabletop game, however, each player rolls up different stats to determine their survivability in the wilderness that awaits them on the other end of the time stream. One player, however, “stays behind” as the Timelord (aka the DM) sacrificing their chance at adventure to make sure said adventure runs smoothly. 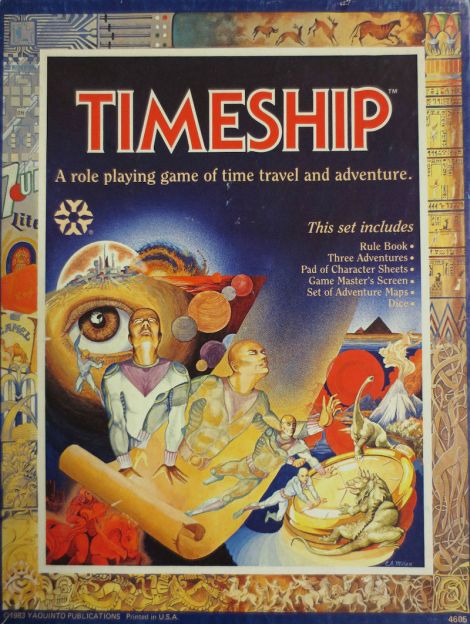 Timeship came in an elaborately illustrated “big box” release with quality materials inside which was typical for Yaquinto’s games — great presentation values and solid crafting. The back of the box was filled with text describing that there were no more “barriers” to play and what the players could expect from this bold, new system.

According to Hastings’ review, the game suffered from a number of issues namely some of the dice rolls, the way the game described its mechanics (and crammed some particularly important rules in the DM’s screen as opposed to the manual), the actual play mechanics, and the generally bland nature of the three included adventures. At the same time, Hastings also confesses that he has a “soft spot” for the game but that it makes it hard to like given its many shortcomings that are just too much to overlook. I’ve felt the same way about some of the games I’ve looked at which have some interesting things going for it only to be overwhelmed by other odds and ends too annoying to ignore…like in Spinal Breakers.

So what happened to Timeship on the Apple II? This is one of those times where it was easier to find info on the original game than it was for its computer version since it apparently disappeared from history. It was supposed to be the first of a series (the included adventure is one of the scenarios that came with the boxed set, Murder at the End of Time which Hastings, in his review above, noted as being his favorite choice out of the three that came with it). But as far as I can tell, that never happened making this the only release.

The only image of the actual boxed game that I could find was this one over at the Museum of Computer Adventure Game History. It comes with a floppy, a Timeship “membership” card, a sheet describing the included adventure, and a game manual.

The only other reference made to the game in the press at the time was from a 1985 issue of CGW when it did a capsule review of the game (which retailed at $44.95) citing Jamie Su and Herbie Brennen as the designers.

In it, reviewer Jasper Sylvester notes that the documentation helped the player set up their basic characters and the program allowed them to register with the “Guild”. He goes on to describe that the “basic attributes” like Strength and Charisma are actually player determined and not randomly rolled. All of the stats start at 50 with the player able to assign changes to them from a pool of points ranging from 50 (average) to 99 (exceptional quality). It’s not the only RPG to do this, but it’s also interesting to note that it’s also similar to what many other CRPGs have also done notably the Fallout series years later which assigns an average score to stats but allows the player to modify them through a pool of points — or by subtracting points from certain stats to beef up others in true min-maxing style.

Weapon skills can also be modified. Each starts with a base of 60 WTHN (weapons to hit number, the lower it is the better) and the player is apparently allowed to subtract a total of 60 points from across the 19 weapon skills. Once that’s done, their character is created and “registered” with the Guild…whoever that Guild is.

Sylvester goes on to describe some of the things that the game doesn’t do very well which, unfortunately, have also been reflected in Hastings’ review of the tabletop version namely the weak NPCs and spelling errors that crop up. In Sylvester’s case, he noted someone was killed with a “steak” when it’s obvious that “stake” was supposed to be there. He also noted that despite having an integrated combat system that he wasn’t allowed to use it against anyone in the game aside from obvious foes, though to be honest, quite a few CRPGs at the time didn’t allow players to attack every NPC that moved, either. One last thing he points out is how the game will actually stop if the player swears using the parser at which point they have to type “sorry” before continuing. 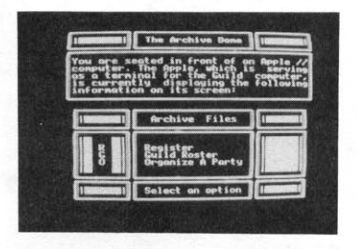 The only capture I was able to dig up was from CGW’s review of the game in 1985, two years after Yaquinto Publications closed and a year after the computer adaptation came out.

It sounds like the game was a mix of interactive fiction and CRPG ideas though there’s not a lot more to go on. Or any more games that were released in what was proposed as a continuing series.

The reason why is probably because Yaquinto Publications (not the printing company under which it was a part of) closed in 1983 making Timeship the last product that they managed to put out. That also partially explains why Five Star Software never followed up new entries leaving this one and only computer iteration of the system to vanish seemingly overnight. There’s also not a lot of information on who Five Star Software was, either. Like the game they made, they also seemed to dissolve into obscurity just as quickly.

Today, you can find an image of the game floating around though not much else leaving even fewer references to what sounded like a neat take on the whole time traveling formula. Could it have developed into something as clever as Timequest? Or as intriguing as Trinity? We’ll probably never know the answer to that…unless someone wants to hop back to 1984 and snags a copy of the game to share the experience.