The Japanese flyer was two-sided and touted the game as an “Action R.P.G.” as you can see at the top.

Fairly typical for Japanese arcade flyers, the reverse side often had a miniature instruction and fact set about the characters, items, and even play controls. Europe would sometimes get the same deal. North American operators, however, would often get a single-sheet flyer with a few token screenshots. In Konami’s case in the early 90s and late 80s, the art was often replaced with live models instead.

Data East was one of the biggest names in the arcades with a string of hits in the 80s ranging from Karate Champ in 1984 (often hailed as one of the fighting game godfathers) to twitch-action classics like BurgerTime and Bump ‘n Jump. They also built their name up in other regions such as the United States by publishing and distributing arcade titles from others such as Capcom’s Commando and Irem’s Kung-Fu Master (which was, in turn, hailed by many as one of the beat ’em up godfathers.). Back then, it was easy to get the impression that Data East was literally everywhere because of their prolific licensing, cabinets boldly labeled with their name on the side like billboards.

Dark Seal from Data East, released in 1990 and renamed “Gate of Doom” when it came to the West, might not have as lofty an influence as a few of their other classics, but it was certainly something very different from the company that gave the world Heavy Barrel.

The Japanese version of the game has a surprising amount of English in it. It was renamed Gate of Doom for Western audiences, but the two games were virtually identical.

Dark Seal’s story gets a few points for putting a twist on why the land is under threat. In this case, it’s the land of Etrulia. But it’s not because of some evil empire or dastardly supervillain in armor.

In this case, the people brought it upon themselves when they became corrupt and wicked. And in apocalyptic fashion, the Gate of Doom opened up to let all sorts of devilish powers into the land to destroy it as a result. But all is not lost! The legend also says that four heroes will rise up to close the gate and save the land. And guess who gets to play the heroes?

Four characters are available to pick from with varying strengths and weaknesses. The Knight is tough, can hit hard with his mace-on-a-chain which gives him some range, and the mace itself can spin after attacking clearing out enemies that might be nearby. The Bard has a trident with great range, good power, and is pretty quick. The Ninja can throw a fan of shurikens in front of him giving him decent breadth and range he doesn’t seem quite as powerful as the others. The Wizard fires off a bolt of burning magic in whatever direction she’s facing, has good power, and excellent range, though as a traditional spell flinger, isn’t quite as tough as a solid fighter. Despite all of the choices, unfortunately, the game only supports two-player co-op and not four.

The attract mode brought up each profile in turn. There was a lot of detail entered for each character, right down to blood type and alignment and although meant little in the actual game, was a nice touch on Data East’s part in trying to dress up the game at the same time.

Each character also has a magic “super” that can be activated once the gauge on the left hand side of the screen fills up with enough monster deaths. A book at the top of the gauge slowly flips through different supers that the character is capable of (all of them share the same set) leaving it up to the player to activate it when it finally lands on the one they want. For example, players can transform into a pillar of flame and shoot explosive bolts with wide areas of splash damage, or turn themselves into a storm cloud and blast bad guys with lightning.

While transformed, the gauge starts to burn down. The player isn’t indestructible, either, despite having become a walking (or floating) death juggernaut.

There always has to be that one NPC that just has to go on a journey into danger for whatever reason. Even when there are “creatures of evil everywhere”. Maybe this is why the Gate of Doom opened — the king kept sending people out to their death on quests like these.

Visually, game uses a tilted, isometric perspective, and the graphics (for the time) are alright. Enemies consist of ye olde fantasy mix of undead types (skeletons and zombies) to the huge bosses and mini-bosses protecting each of the title’s five areas. Design-wise, a few of the areas such as the ice level boast different pathways that you can explore to seek out and break open chests of loot.

Players only start out with three hearts in their health gauge (the poor Wizard here was already hit with something dropping it to two) leaving it potions found along the way to boost them up. Or keep them alive.

Transforming into a floating pillar of flame and lobbing miniature nukes can be pretty fun.

Gear, in the form of gauntlets, armor, boots, etc.. can even be collected and are automatically equipped. Boots help you move faster, armor protects, and so on, with the explanations for what they do on typically located on the arcade console’s control panel.

Even though it’s touted as an “Action R.P.G.” above, I’m not so sure that it actually fits the bill relative to others such as Blizzard’s Diablo or Nintendo’s The Legend of Zelda. It’s more of an action adventure hack ‘n slash which isn’t a bad thing in and of itself and does a solid job in filling that niche. Renovation’s Arcus Odyssey on the Genesis the next year in 1991, for example, seems to fill in that definition a bit better despite appearing inspired design-wise by some of what Dark Seal had done in the arcade.

The bosses take a number of forms from this flying drake… 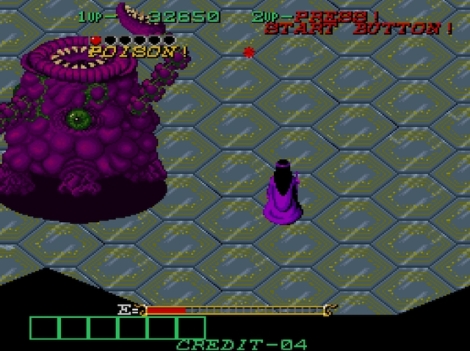 …to this nightmare thing that might have crawled from the Mountains of Madness.

As a game, Dark Seal felt as if it ran down a checklist of things it needed to do. It was fast paced, had co-op, the enemies were often cannon fodder, and the boss battles were pretty straightforward if not a little cheap from time to time. It was also pretty short, though trying to stay alive could be a challenge thanks to the traps that the game liberally throws at the player. Continuing from where you died also penalized you by resetting your score to zero.

It didn’t really stand out that much, either. I give it points for doing what others such as Capcom and Konami were attempting at the time in weaving more story elements between each stage in the form of short cutscenes. It even has an ending featuring a night to dawn effect washing over a castle.

Unfortunately, the game never came home until somewhat recently when a port appeared on the Zeebo, a cheap microconsole that began showing up on shelves within select regions around 2009. Even Data East Arcade Classics Collection for the Wii in 2010 completely ignored it.

All’s well that ends well. Now don’t go wandering into danger again! And be excellent to each other! 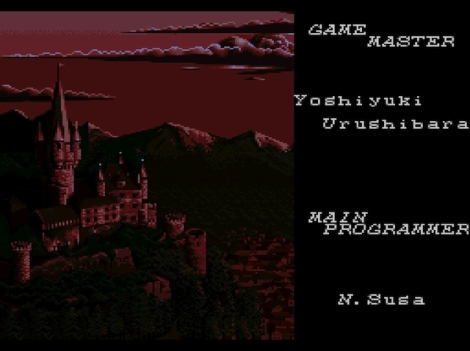 This scene lights up with a neat effect as the credits roll by, turning into dawn.

And so another legend comes to an end!

Before the Zeebo, unlike a number of Data East’s more popular titles, Dark Seal was relegated to the darkness that swallowed so many arcade classics. As for Data East, the storied company finally went belly up in 2003 after numerous attempts in trying to get back into the business of making games, ultimately leaving its intellectual properties in the hands of others and a big question mark on whether any of its other classics may find their way back into players’ hands.