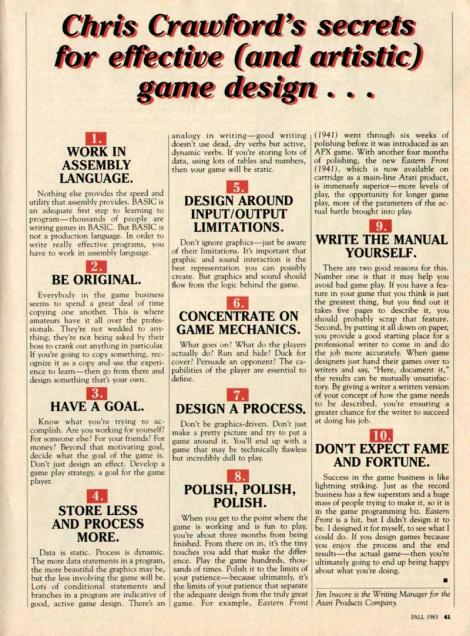 In the Fall 1983 issue of Atari Connection, journalist Jim Inscore tapped Chris Crawford (then working at Atari) for his secrets to game design. This is the result.

It was late 1983. In video game history, that was the year popularly held as the starting mark of the Video Game Crash that devastated the North American market and brought low a number of companies invested in its future.

Atari, once a titan of the industry, wasn’t immune. Consoles, once seen as the darlings of gaming by the retail industry, couldn’t leave their shelves fast enough to make room for inventory that had a better chance of earning back their money. Personal computers were also on the rise and many saw them as the way forward. Consoles were dead. But Atari had also invested in its computer division with its 8-bit 400 and 800 series of PCs that first launched in 1979, and a man by the name of Chris Crawford would eventually join them in the same year.

Crawford was no newcomer to game design. The young teacher with a masters in physics had been doing it since the mid to late 70s shortly after graduation, focusing on writing strategy titles on PCs such as the Commodore PET.

After working on a few titles for Atari, he continued experimenting with their 8-bit computer. His work eventually culminated in his 1981 game, Eastern Front 1941 which focused on the German invasion of the Soviet Union. It was a critical and commercial success for its incredible depth of detail and is regarded as one of the very first computer wargames that seemed able to compete with their tabletop predecessors, much like how CRPGs of the time continued in their own pursuit to cross their own uncanny valley between themselves and their pen and paper versions.

Even though more than three decades have passed since Crawford created his ten rules, a number of them still make a lot of sense today such as #2’s exhortation to “be original” along with #8’s “polish, polish, polish” which some games today seem to have a chronic lack of. The last one, #10, also makes a sobering point that other designers have also shared in making games that they themselves would love to play and not so much because they think it will become their personal Fort Knox.

Today, Crawford is considered by some to be a controversial figure in the industry for his views such as declaring that video games are dead because the industry does nothing more than rehash the same ideas over and over again. On one level, it’s hard to argue that when there are many examples of where companies find it safer to stick to established formulas than in daring to do anything too different — a situation Crawford wants to see change.

And because of that, to others, he’s someone deeply committed to reinventing games as true, interactive art even if he has to strike out on his own to do it, someone seeking to keep alive that creative impetus for originality that he feels has all but disappeared.

He’s still at it today, creating new tools and “storyworlds” using his previous work as a foundation while inviting readers along to explore his thought processes on solving each issue. You can check out his latest ruminations at his personal site where he continues to work on cracking the code for truly interactive storytelling. And maybe one day, even share a new list of secrets that he’s come up with for effective and artistic game design.