The Japanese flyer for Asterix (courtesy of the Arcade Flyer Archive) featured both characters on the cover with the backside filled with screenshots and info on how the play the game. Not a bad looking flyer.

Konami’s hunger for cartoon licenses substantially grew after 1991’s run with The Simpsons and Turtles in Time. In 1992, all four of the arcade beat ’em ups it brought out were adaptations of existing works: Wild West C.O.W. Boys of Moo Mesa, Bucky O’ Hare, X-Men, and one that audiences in the States may never have heard of but was renowned around the world — Asterix.

Asterix was based on a series of French comics originally created by Rene Goscinny and Albert Uderzo that started back in 1959 and centered on the character of the same name, his bestest buddy, Obelix, and their adventures. Often, with their fellow Gauls back at the village, they find themselves fending off Julius Caesar and his oafish Roman legions in slapstick fashion. 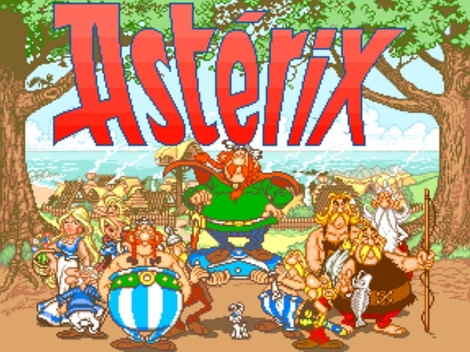 Asterix is the mustachoed guy on the right with the winged helm. Obelix is that big guy on the left. Both are playable.

Asterix was the diminutive, Gallic mustachoed, winged helm hearing thinking warrior while Obelix was the big (don’t call him fat!), kind hearted, simple minded lovable giant. They were aided by Getafix, the village druid, whose magic potion temporarily imbued anyone who drank it with great strength. This allowed Asterix and his fellow villagers to bounce enemies like basketballs except for Obelix — he fell in a cauldron of the stuff when he was only a baby, so he’s permanently super-powered.

Key to the series’ fun was the humor which poked fun at everyone and everything, translating modern puns (such as the druid’s name…Getafix, “get a fix”) and caricatures into a classic underdog story of independence and exceptionalism. They were universal themes that made it appealing to an ever widening fanbase in France and, eventually, the rest of Europe and the world, selling hundreds of millions of books over time with a stream of animated and live-action adaptations over the decades that are still being made today. The series even has its own Disney’like theme park near Paris, Parc Asterix.

The comic series is still ongoing more than fifty years later, though not in as much a comic strip as collected albums telling a specific story which they were often sold as.

So by 1992, to Konami with their appetite for licenses, it made almost perfect sense to adapt what may be France’s best selling comic series ever made into a video game and ride the brass and nickel plated wave with a new beat ’em up.

Like many of Konami’s games, Asterix ran on one of the many hardware boards Konami created for the arcades. Unlike competitors such as Capcom which worked at standardizing its hardware with the CPS series, Konami’s spaghetti approach culminated in a dizzying array of different configurations. Their modus operandi followed that of many arcade manufacturers at the time in creating specific hardware solutions for one or two games before moving onto something else requiring arcade owners to sometimes gut a machine in order to set it up for a new game.

With Capcom’s CPS, all one really had to do was swap out the ROM cartridge with a new one instead and tool up the outside of the cabinet to match the game. Konami would sometimes build a board out and use it for two titles before cobbling a new one together in the same year.

Asterix’ board, however, did adopt a number of fixtures that others like Capcom and SNK used in their own hardware solutions namely the super popular Motorola 680000 16-bit CPU along with a Zilog Z80 CPU and a pair of Yamaha chips for sound. It also saw more use than a few others in being the foundation for C.O.W. Boys of Moo Mesa, Bucky O’ Hare, and even G.I. Joe‘s run ‘n gun which came out in the same year. 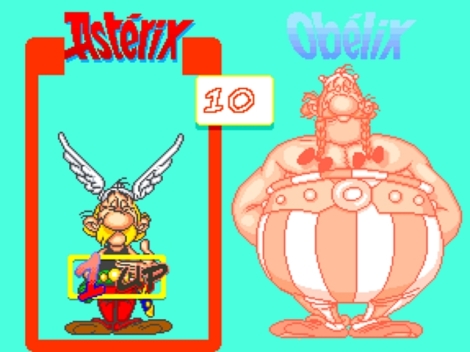 Asterix was quick and had a sliding attack which was really useful in certain fights where bosses were weak to it. Obelix was a big guy with good range on his melee attacks, but for obvious reasons, couldn’t slide on the ground like Asterix to deliver low attacks.

Asterix’s gameplay followed the typical beat ’em up formula with an eight-way joystick, two buttons (one for attack, the other for jump), and plenty of side-scrolling action with sprite art done up to look just like the comics. Like Konami’s work with Teenage Mutant Ninja Turtles and The Simpsons, Asterix was another demonstration of their designers’ expertise in creating what were close to being interactive ‘toons that fans could leap into and start cracking heads with.

Two-player co-op was included, but at the default settings, continues were surprisingly limited unlike many other beat ’em ups which made the game exceptionally challenging for players that wanted to get through all of the Acts through practice instead of grinding through with enough coins. Though like anything else from the game’s internal menu, they could be adjusted by the arcade owner. 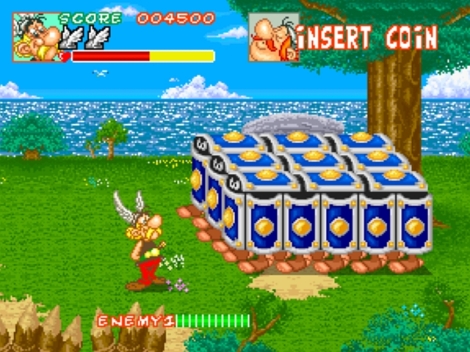 A Roman testudo with some very serious Romans inside challenges Asterix.

The game went through seven “acts”, each one a level inspired by a mix of elements from the comics. For example, Act 2 was apparently inspired by 1965’s Asterix and Cleopatra (which became an animated film in 1968). The end boss was an evil architect named Artifis (artifice) who really just stood on the sidelines while the real boss, Iris, fought you. Iris, in turn, was an Egyptian hypnotist from the animated film, The Twelve Tasks of Asterix in 1976 which was later adapted in comic form as Asterix Conquers Rome in 1979 — the only Asterix film to have been based on an original screenplay rather than an existing comic story. Konami’s designers did their homework. 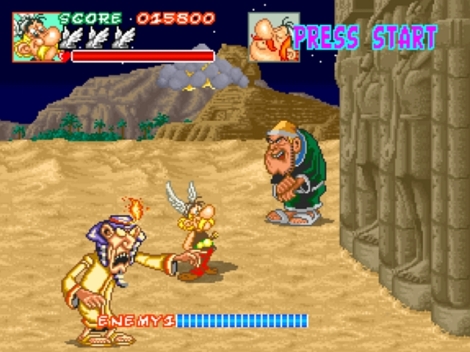 “By Osiris and by Apis! Look at me! Look…into my eyes!”

The game also featured dual language subtitles that ran simultaneously during the cutscenes and scrolling text at the end of each act wrapping things up before the next adventure, one in French above the other in English.

As far as the gameplay went, it didn’t have any health or weapon drops aside from the scripted appearance of a magic potion from time to time that acted as the game’s smart bomb temporarily turning the character that used it into death itself.

Instead of the usual “super” or “desperation attack” done by pushing both jump and attack at the same time as found in a bunch of other beat ’em ups, Konami’s designers allowed you to hold down the attack button which spun up your character’s arm and when you released it, whacked whatever enemy it hit with a vicious uppercut. Hold it too long and it tuckered your character out, but players could repeat this attack as many times as they wanted since it wasn’t tied to health. This move alone gave the game an added level of fun as I went around uppercutting whoever I could, especially the bosses, since it was a pretty devastating attack.

Animation-wise, the game seems to have bottled the spirit of the animated films in every painted pixel. Frightened Roman soldiers scurried away after being beaten down, bosses’ wide-eyed reactions to defeat, Asterix slapping around soldiers picked up from the ground, Obelix bounding into enemies with his tummy, and a variety of other comedic cues alongside the voice samples and music celebrated both the artistic style and humor straight from the comics and animated films. 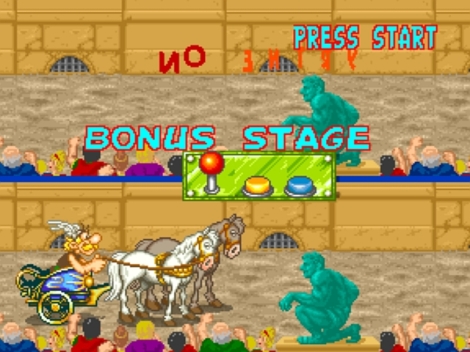 The chariot stage had you jumping over puddles, bushes, and eventually, Roman soldiers in a bid for bonus points.

If you’ve never seen this game in the arcade, or have never heard of Asterix before, that’s not surprising. Despite the massive acclaim that the series has had in Europe and many parts of the world, it was never quite as well known in the United States. The same with Tintin, although Spielberg’s 2011 film adaptation undeniably made more than a few moviegoers curious in knowing more about the series which could only be a good thing. 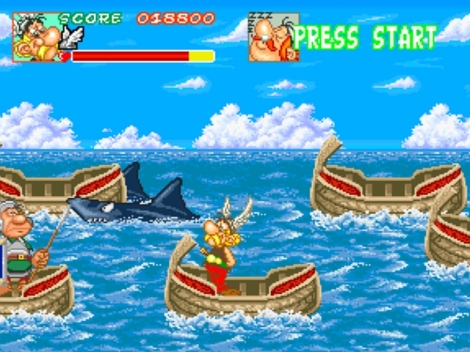 Konami’s designers did introduce a few creative touches to the stages like this one where staying on these floating boats kept you away from the sharks, though falling into the water wasn’t instant death. As creative as this was visually, kind of annoying to play this off as a platforming level in trying to get up on the boats. 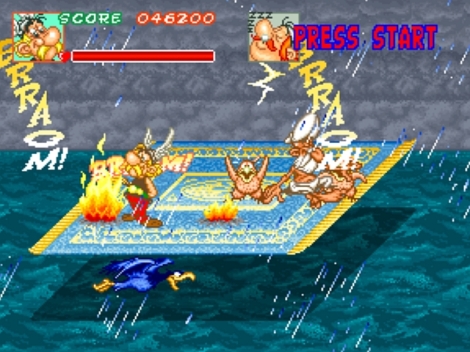 In this sequence, Asterix and Obelix make their way to India to rescue a princess. At the beginning, you have to stay on the carpet while trying to avoid lightning bolts from above. Falling off wasn’t a good idea. 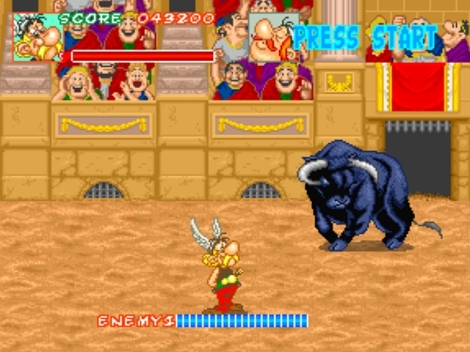 Some bosses would have incredible defenses against everything, repulsing the player, until you found that one attack that they seemed weak to like a sliding move, jump attack, or holding down the attack button to charge up a super spinning fist uppercut attack. 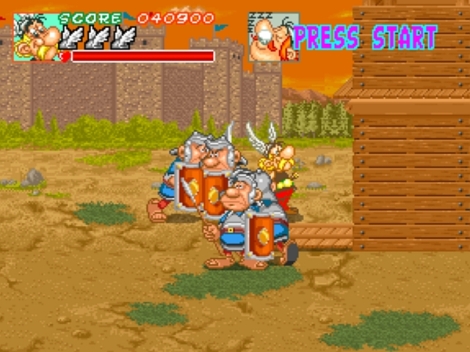 If that Roman looks bored to you, it’s because he’s only the latest batch to come out of a siege tower that you have to break down floor by floor by punching each section apart. Funny? In a cartoon way, sure. Fun? Not really. Definitely one of the most boring parts of the game apart from a few of the lackluster boss fights. 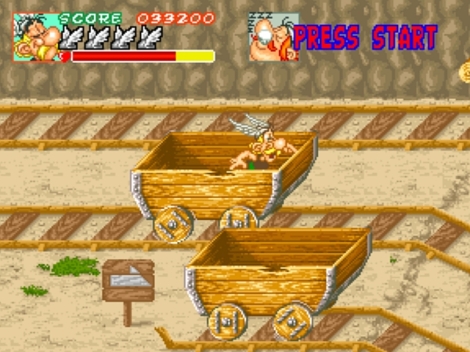 The mine cart part of one of the Acts was a neat diversion from the usual button mashing. You had to jump from cart to cart on your way down a mountain that you had to platform up while beating down bandits.

Asterix was a solid beat ’em up if not the most exciting one that Konami had put together. The action could get a bit repetitive, the bosses weren’t too exciting (and could sometimes seem pretty cheap), and it could have done without as many platforming sections in trying to break up the endless stream of so many Romans.

Still, the game introduced a host of creative levels from chariot bonus stages to barrel busting challenges on viking ships. The comic exploded to life thanks to the fantastic art direction, animation quality, and the humor. If you were fan, this was a game made just for you much like how Konami’s TMNT games catered the same on both consoles and the arcade. 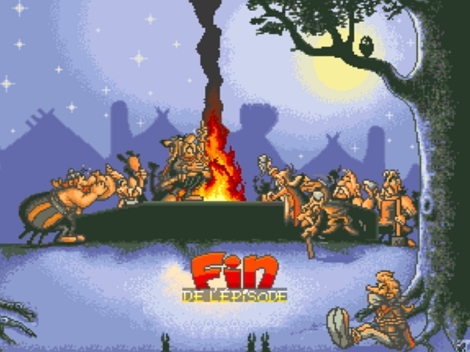 After beating Caesar’s menagerie and his top gladiators in Rome, he finally promises not to attack the Gauls’ village anymore. At least in this adventure. Following the credits, the game starts back up again from the first act.

And speaking of consoles, it was also one of those beat ’em ups that never made it out into another collection anywhere else or was ported over. Much like C.O.W. Boys of Moo Mesa and Bucky O’ Hare, it was left behind as another casualty of the declining arcade scene. For Asterix fans, however, its shortcomings could be easily overlooked as a rare piece of the series’ history and as a welcome adaptation…one that many are probably hoping Konami will revisit again one of these days.

4 responses to “Gauls from arcade’s past – Asterix”