The arcade flyer above for the EU (which was also similar to the Japanese version) was also typical in telling arcade operators more about the motivating story behind all of the punched faces and gut kicks. Also, the illustrative art was particularly good — certainly better than some of Capcom’s own flyers for their own beat ’em ups, though the quality could also be just as different.

By 1991, Capcom was on fire in the beat ’em up scene thanks to titles like Final Fight, Knights of the Round, and King of Dragons. Others were also eager to stake out their piece of the arcade pie like SNK who brought out Burning Fight which could have been mistaken for a Final Fight clone…and not a very good one.

You’ve got these guys in Final Fight…

…then there were these guys. I don’t know about you, but I’d rather play as the Mayor that looked as if he could bench press a bad guy in his spare time. Even the text looked boring, but thankfully, the action was decent. Until the last two stages.

Burning Fight ran on SNK’s shiny new Neo Geo MVS (Multi Video System) hardware, introduced in 1990, which was aimed at reducing costs on both the developers’ part and that of arcade operators through standardization, much like Capcom’s CPS-1.

The biggest difference was the reason it was called the MVS — arcade operators could opt to purchase a single-slot board up to a six slot version allowing them to stack six different game roms (packed in cartridges) in one machine, effectively making it a multi-game cabinet. Capcom’s CPS-1 could only support one game at a time. It didn’t get the kind of multi-game slot versioning that SNK created for theirs.

The system was configured around the power-pairing of Motorola’s 16-bit 68000 processor and Zilog’s Z80. It was an extremely popular combo in the arcades that also saw action in hardware such as Capcom’s CPS-1 and Sega’s own cabinets (and consoles like the Mega Drive/Genesis). The system also had a Yamaha 2610 running the sound. On paper, it was close to Capcom’s CPS-1 and slightly better than it was in some respects, though, as it always does, it really depends on the games that can take advantage of that kind of power.

The hardware was even packaged into a home version (the AES, or Advanced Entertainment System). Even though it was a few times more expensive than its competition (it debuted at $649.99 and carts could cost a few hundred apiece), it was also the most powerful home console available because the ROMs it played were straight from the arcade. If you wanted an arcade machine in your home sans a cabinet, the Neo Geo AES was it.

Tom Anderson, a Hulk Hogan wannabe, is in back as muscle for…the yakuza??? He’s one of the bosses who gets a palette swap later and shows up again and again. Recycle trash thugs? Okay. Recycle the bosses? Now that’s not even trying anymore.

Burning Fight was an urban beat ’em up featuring the popular two-player simultaneous play mode. Three characters were available to pick from, it provided plenty of enemies to beat on, and continues started you right where you left off if you ran out of lives though your score would always get reset.

This was also a game light on story…as in non-existent. There wasn’t much to the attract mode, either, than a brief stat screen for each of the three heroes. To its credit, it didn’t throw up the ol’ “save the girl” premise already abused in a number of other games. Instead, according to the flyer given out to arcade operators (and the presentation materials included with the retail carts for the home system), this was a war against the Castella family from Metro City who are trying to expand into Osaka of all places.

They’ve allied with a violent Japanese group there and two “dangerous characters”, Duke and Billy, are dispatched by the Metro police to team up with Japanese detective, Ryu, in stopping them in what feels like a throwback to the 80s martial arts films mixing in evil gangs manipulated by well-manicured Western thugs. Even during gameplay, though, story’s pretty thin compared to Final Fight actually trying to work a little of it in every now and then. Burning Fight sticks to the basic beat ’em up formula with few frills leaving it to your imagination and whatever scraps are on the screen. 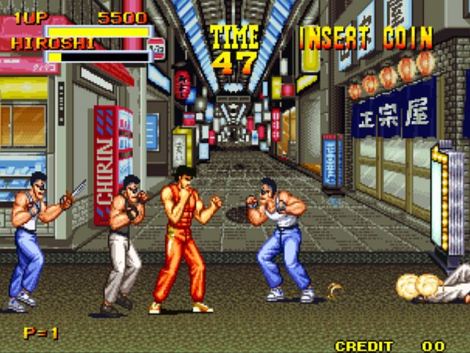 Burning Fight took its fists and feet to the seedy underbelly of Japan with streetside shops shade wearing toughs that might have been refugees from Ridley Scott’s Black Rain in ’89. It’s almost as if Sega’s Yakuza went back in time to spin itself off as a beat ’em up.

The characters are almost carbon copies of each other in terms of fighting styles despite looking different, though Ryu is clearly the fastest of the the three. Each have desperation attacks that eat a bit of your health when they connect and have decent looking combos. The five stages cover the streets of Japan, an underground mall, a construction zone, and ultimately, a yacht. They’re also broken up with mid-level bosses, gobs of enemies, and a brutal end-boss…all of which eventually get recycled into the last stage. Visually, it’s not an ugly game, but compared to the background work seen in other beat ’em ups, notably those from Capcom, it was alright.

The music wasn’t bad, it did the job in scoring each scene. Sound effects varied from being okay to just weird — rattling chains sounded like they wanted to rattle and then got tired all of a sudden — while the difficulty could unexpectedly spike when you least expected it to as enemies mercilessly juggled you from time to time.

One thing that Burning Fight added (and which Capcom would also use in beat ’em ups like their Dungeons and Dragons adaptation, Shadow Over Mystara) were optional side rooms. In Burning Fight, these were optional bonus areas where the goal was just to smash up everything in sight and pick up any goodies that might drop for points. Outside of the stores, there were also occasional bystanders, like a guy standing outside a store, that you could beat up for merely standing there.

Burning Fight was available in the arcade, at home on the Neo Geo AES, and even the Neo Geo CD system. It was also part of the SNK Arcade Classics Vol. 1 compilation released for the PS2, PSP, and the Nintendo Wii. It was also made available through Nintendo’s Virtual Console store.

Your mission? Wreck this random store because it was there.

Burning Fight was fun until the last two stages when the recycling of the most annoying enemies in the game started getting out of control especially when it did it to bosses like Dolf Lundgren’s lookalike. Overall, it’s a pale imitation of its peers like Final Fight and Double Dragon.

That doesn’t make it completely terrible, though, just another decent could-have-been from SNK with one or two neat ideas like the walk-in bonus areas and the variety of wreckables. Still, if you were ever curious what a 2D, side-scrolling beat ’em up version of Sega’s Yakuza could have looked like in the 90’s, Burning Fight comes close. But as far as beat ’em ups are concerned, you could also do better.