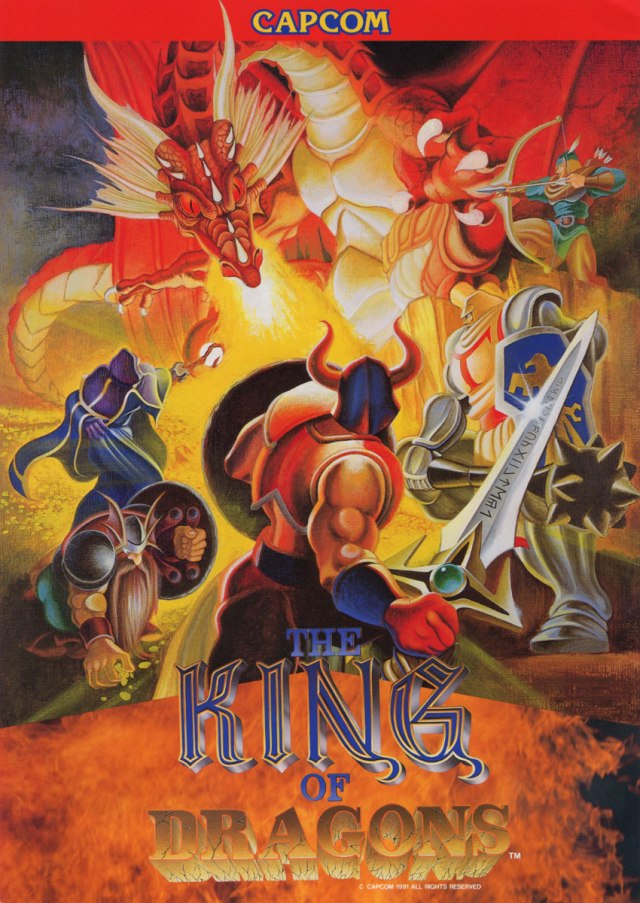 Preserved on the Arcade Flyer Archive, this colorful flyer design was used in both Japan and Europe.

Almost two years after Final Fight’s debut in 1989, Capcom released another beat ’em up in 1991 giving players a break from smashing phone booths and cleaning up urban blight. This time, they’d plunge their beat ’em up formula into the world of high fantasy with The King of Dragons.

The King of Dragons ran on Capcom’s CPS-1, the arcade hardware that they had developed using Motorola’s remarkably prolific and flexible 68000 16/32-bit processor and Zilog’s incredibly popular Z80. Backing it up in the sound department was a Yamaha YM2151 along with an Oki OKI 6295 voice synthesis chip. It helped cut down on costs for both Capcom and arcade operators by making it possible to swap out the game ROM for a new one instead of having to replace all of the hardware. It made the CPS-1 a versatile piece of tech grounding a number of hot hits from Ghouls ‘n Ghosts to Street Fighter II in the late eighties to early nineties. 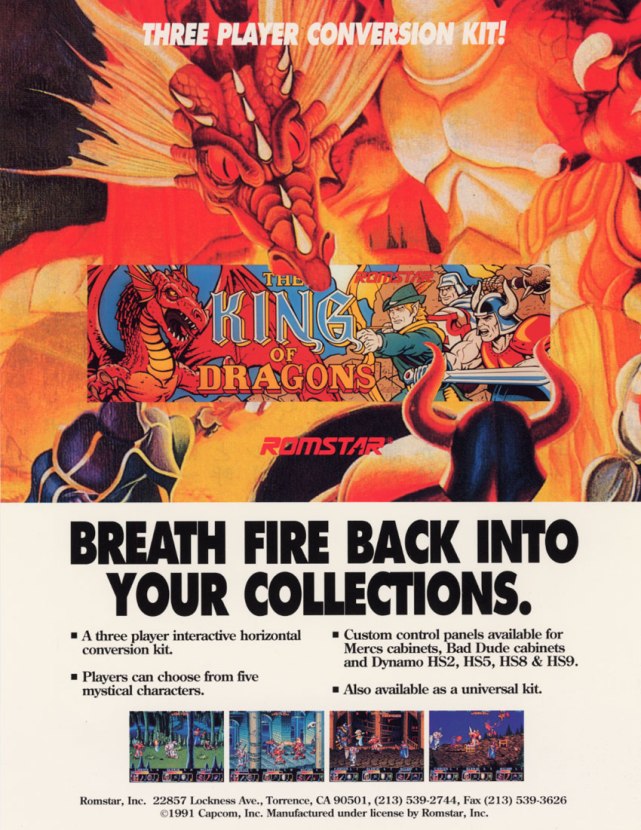 The US version was a simple, one page affair with screenies on the bottom and a cut of the larger illustration used in the Japanese and European markets. It also had a shot of the marquee with Romstar’s (the distributor for the game in the US) name.

Up to three simultaneous players could pick from five iconic classes popular in pen-and-paper setups like Dungeons and Dragons — the Elf (archer), Wizard, Fighter, Cleric, and Dwarf (warrior) — and level them up based on their score. Each had their own strengths and weaknesses: the Elf had great range but a weak attack, the Wizard was good with magic but terrible at everything else, the Cleric was a decent all-rounder but slow and had terrible agility (terrible jumper), the Dwarf is hard to hit because of his height and fairly decent at combat but also has a terrible range to deal with, and the Fighter is the best all-rounder with a strong attack, range, defense, and agility though he’s terrible when it comes to magic. 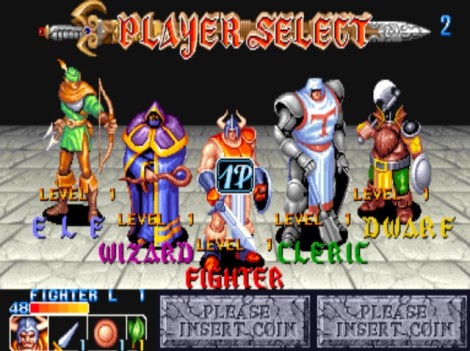 Each character also had a “desperation” attack, like Haggar’s spinning fist in Final Fight, that could be triggered by simultaneously mashing the jump and attack buttons as long as the player had health to burn.

Leveling up was handled by how well you scored awarding characters with better health, the Cleric leveling the fastest. Special weapon and shield drops (not every character could use shields, however) awarded after boss fights or found shortly afterwards in the next stage powered up attacks and defense respectively, much like the system used in Capcom’s Magic Sword in 1990. It was an approach that would also be re-used in Capcom’s licensed take on Dungeons and Dragons with Tower of Doom and Shadow over Mystara.

Action-wise, the game followed the beat ’em up formula of its peers in being a 2D, side scrolling, eight-way movement brawler — only now with weapons and magic — pitting would-be arcade heroes against mobs of enemies. Most of the bad guys in this game were palette swapped enemies recolored into different ‘grades’ of toughness with green usually indicating and weakest level of foes. Legions of orcs and lizard men provided plenty of fodder across sixteen stages of hack ‘n slash, beat ’em up action.

Though it sounds like a lot, the stages were also incredibly short versus the fewer stages found in a game like Final Fight which were much longer in comparison. Capcom was also generous with their continues allowing players to keep their scores and jump right back into the action where they had died. 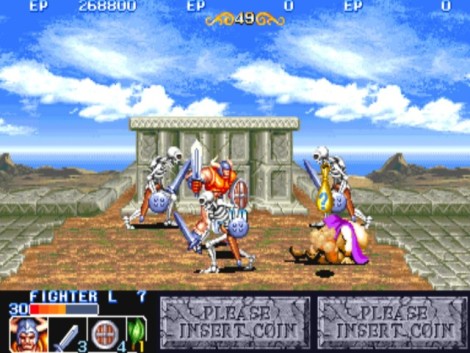 There were a decent number of enemies along with a familiar thief that bears something of an uncanny resemblance to his cousin in Sega’s Golden Axe from 1989.

Story-wise, it wasn’t quite as deliberate as Final Fight’s, though it did step up dialogue cuts in the last few stages. The basic gist is that the dragon, Gildiss, has awakened from a long slumber and is terrorizing the kingdom and the heroes are off to stop him by traveling across the land through towns, castles, and underground passages until they end up at his lair.

The arcade game was sparse on the info, but when a port of the game for SNES was released in 1994, the manual was plastered with background information including names and biographies for each of the main characters. 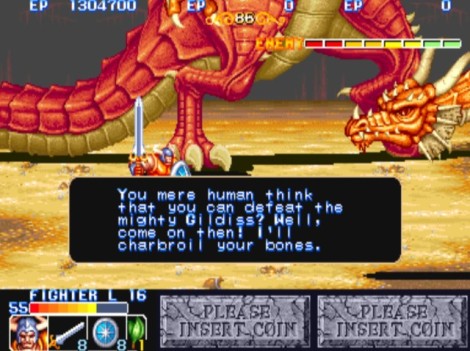 Cuts like this became much more frequent in the latter half of the game. As big as Gildiss was, however, he wasn’t quite as exciting as Capcom’s other bosses.

The King of Dragons wasn’t bad as beat ’em ups went, though compared to Final Fight, it was a relatively lightweight take with decent sprite work making it a sort of dry run for Capcom’s even bigger fantasy productions later on. The music, on the other hand, was pretty great thanks to the work of Yoko Shimomura who some might also remember in other, more relatively recent games such as 2013’s Kingdom Hearts 3D.

Boss-wise, they weren’t too remarkable aside from “massive” ones like the Hydra and Gildiss at the end, though they weren’t really that ‘large’. Here, Capcom’s artists created a neat trick by using off camera angles to create that illusion by showing the huge body in the background while fire-breathing heads came in from above or from the sides of the screen. 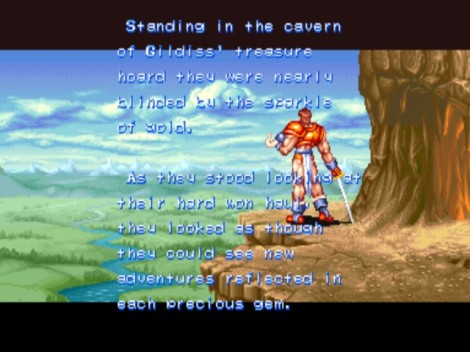 Complete with an extensive wall-of-text ending, The King of Dragons allowed Capcom to bring their brand of action oriented storytelling to the masses in the arcade.

The SNES port wasn’t bad, either, especially if you were a beat ’em up fan looking to jump into a co-op (of only 2 players for the port) fantasy take of Capcom’s well trod formula. Later, the game would find new life on the PS2 and the Xbox thanks to volume two of the Capcom Classics Collection. It would also be on the PSP as part of Capcom Classics: Reloaded and the downloadable Capcom Arcade Cabinet bundle for both the PS3 and the Xbox 360.

Today, The King of Dragons can hold its own as an alright game though it doesn’t do anything too exciting aside from providing Capcom with more experience in the field as well as helping polish their efforts in merging together story and action in the same package, something that later games such as The Punisher and Tower of Doom would take to new levels.