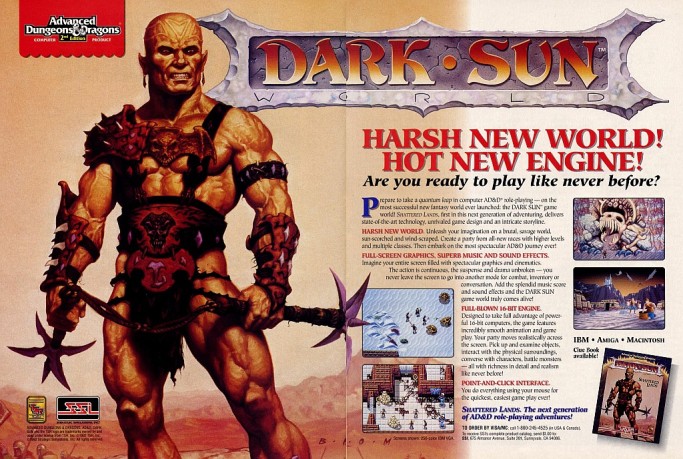 This 1992 two-page spread features art straight from the campaign set released the year before and shows off a number of detailed screenies. Even though it mentions the Amiga and the Macintosh as release targets, 1993 only saw the IBM PC version released to retail.

As the Gold Box series wrapped things up in 1992, SSI readied its next “big series” with a new engine and a post-apocalyptic world of high fantasy on disk or CD-ROM (though there was no difference between the two, content-wise).

TSR’s Dark Sun setting was introduced in 1991 set on the world of Athas and was something of a big change from the usual fantasy trope. Instead of a world laid waste by super science when nations began lobbing nukes at each other like dodgeballs as in Gamma World, Athas was turned into a near desert by the rampant abuse of magic. Here, wizards and sorcerors were known as defilers because they drew their powers from the very life of the land around them to work their miracles giving nothing back in return.

It was a setting steeped in ecological overtones. Athas was once a blue world covered in a vast ocean in what was called the Blue Age. Halflings were the only civilization and were masters of nature creating floating cities on the waves and reaping the bounty of its waters. When their efforts to double the production of their own ocean resulted in an apocalyptic brown tide that began spreading, killing everything, the halflings undertook an incredible effort to reverse their mistake. The effort, however, required an incredible influx of power, and the nature masters discovered a way to tap into the blue sun of Athas to fuel it, stopping the tide but also transforming their sun into a burning yellow orb.

The oceans began to evaporate, revealing new lands, and the Blue Age was ended. The halfling nature masters saw the decline of their civilization and used their gifts to transform themselves into different races in a time dubbed ‘the Rebirth’. There, new civilizations rose up amongst the vast greenery that heralded the Green Age.

But this new world wouldn’t last. A being named Rajaat would become known as the First Sorceror and usher in the birth of magic. But unlike the magic of other worlds where mages pull from a well of ethereal energy, the magic of Athas is directly tied to the land — and the living. Rajaat sought to conquer the world via campaigns of genocide, anointing Champions to act as his generals in wiping out the other races using the gifts he would teach them.

Vast tracts of green, living land were reduced to ashen sand over time as the Champions and the other sorcerors who learned the ways of magic continued to bleed the planet dry over the centuries. The sun turned from yellow into a bleeding, red sore that hung in the sky. What they didn’t know, however, was that Rajaat was secretly planning to restore the halflings as the masters of their world once again in a new Blue Age.

They eventually suspected what Rajaat was truly planning and acting together, overthrew and banished him to a space beyond Athas to serve as his immortal prison. These Champions now became the first Sorceror Kings of a devastated world, the most powerful one among them transforming into a Dragon that would watch over Rajaat’s prison for all time. The others would rule as immortal beings over those lands that they took for themselves, living their promised reward as Athas spirals into a slow death.

Rajaat’s legacy not only included magic, but two forms of it — defiling and preserver. Defiling magic rips at the life around a caster, reducing everything to withered ash but promising a faster path to power. Preserver magic was focused on drawing only enough, giving back what wasn’t needed and maintaining a careful balance. Psionics was also revealed as another art through Rajaat’s studies, and all three were revealed to the world and under the veneer of teaching those seeking such knowledge in order to secretly find those willing to follow him.

It’s into this apocalyptic stew that SSI’s Shattered Lands in 1993 drops the player. Life is brutal, short, and often only the strong are the survivors — or those with the connections to get by. Decay and death lie beneath the surface of the proud cities ruled by the capricious Sorceror Kings. If Mad Max were a gladiator, he’d be at home here.

The new game featured an evolved version of the technology used in SSI’s Gold Box series. Gone was the first-person 3D window or a list of characters onscreen with a text box. Now, the screen was taken up with a top-down view and a seamless transition into the tactical mode without leaving the actual area to create a new scene around it. A single, animated character sprite represented the party which expanded out into individual party members when combat actually began.

A mouse driven interface ran everything. Click on the party icon and all of the crunch you missed onscreen from the Gold Box series filled the view. Combat also ran the same way — click to move party members, bash bad guys if they’re in melee range, equip gear from the character screen, roll up statistics (which seemed to be pretty high across the board compared to the usual numbers AD&D characters in other games would get), or pick through spells to cast. The cursor could also be used to search props in the game world, loot stuff, open doors, and talk to the massive number of NPCs found everywhere.

Shattered Lands’ engine was also a logical extension of the work SSI had long been doing in the tactics space taking advantage of the rapidly escalating technology curve that IBM PCs were beginning to experience. Although the ad above boasted releases for the Amiga and the Macintosh, neither platform would actually get the game when it finally came out in 1993, possibly a victim of cost cutting and a shrinking entertainment market for both.

Character creation was still steeped in AD&D rules with a number of important changes. Athas has no gods, so clerics draw their powers from the elements themselves and pay their respects to the same, for example. Half-giants, insectoid thri-kreen, and muls (half-dwarves) also rounded out the races players could pick from. Psionics were a big part of the game as both a profession and something to worry about in the hands of enemies. It was also the first SSI/TSR game to open it up to players despite psionics having been a part of AD&D’s PnP world for quite some time.

Story-wise, the game started players off as gladiators sent to die in the pits of the city of Draj. Eventually, the player will find a way to escape and break free of the city soon becoming involved with a desperate plan to stop a defiler from conquering the region with forbidden magic. They’ll explore the world of Dark Sun, the blasted lands around the city of Draj, and the ruins beneath its sands that hearkened back to a greener time. Though the story itself wasn’t anything too special, it did introduce players to one of the more unique fantasy settings that TSR had come up with.

The faster pace of the game was also reminiscent of JRPGs within their own overworld exploration modes which, because of their limitations, took a more simplified approach in both controls and information delivered (although Dark Sun’s NPCs had a lot of text for players to read through). But the perspective and use of it have also long been staples among CRPGs. Origin also used the same perspective with a slightly more action-oriented approach with 1988’s Times of Lore.

Compared to older efforts such as Origin’s Ultima VI: The False Prophet in 1990, or Ultima VII in 1992, Shattered Land’s engine seemed to be slightly behind the times except for when it came to turn-based, party oriented combat which SSI still had as its tactical bread and butter. The game looked good, played well, and was fun for many — but visually, especially as sharp changes continued to pop the bar every few months, it also found itself challenged by efforts from what other CRPGs were doing to raise the stakes as Westwood Studios’ Lands of Lore and Origin’s Ultima Underworld.

The visuals also didn’t quite translate the blood and sand grit that Dark Sun’s world was borne on, or the dark undertones of its apocalyptic backdrop, but altogether, they were still a welcome update from the aged engine running beneath the venerable Gold Box series. Given enough time, it might have gone even further with more of the details lurking behind the dunes of Dark Suns’ world and it would try again with the sequel in 1994. There was even an MMO planned around the Dark Sun world which managed to stumble out of the gate in 1996 only to be shuttered two years later in 1998 despite a number of innovative ideas. And much like the rest of the TSR/SSI catalog, Shattered Lands would be abandoned to the ‘net as many of its siblings and predecessors were, as lost a treasure as those from the Blue Age.

6 responses to “From the ads of the past, games of yesteryear – Dark Sun: Shattered Lands”