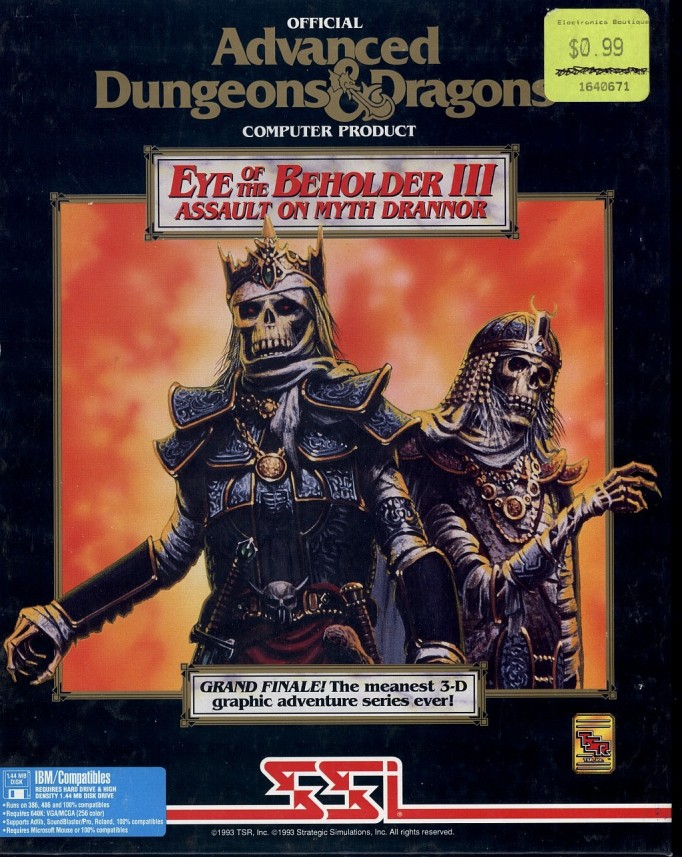 The last chapter to the Legends Series that had begun with the first Eye of the Beholder by Westwood was considered by many to be the weakest in the series. Heavy on combat, light on story, and created by another group at SSI other than Westwood, it lacked some of the polish of the first two and came across like a cash-in to simply finish the series. Even the box art was a bit on the boring side.

The last game in the “Legends Series” from the SSI/TSR team-up wasn’t put together by Westwood Associates (who would go on to be known as Westwood Studios) when it released in 1993, and fans noticed.

New competition in the 3D space from the house that Ultima built, Origin Systems, had also made it and other grid-based CRPGs look old thanks to 1992’s Ultima Underworld. The sequel, Ultima Underworld II, would also come out in 1993, adding additional pressure. But die-hard fans still gave EoB III a spin if only because it was the “GRAND FINALE! The meanest 3-D graphic adventure series ever!” as the cover would proclaim and bring at least some sense of closure to the party they had imported on through since the first game in 1991.

It also didn’t seem to get much of a marketing push. The ads for both EoB I and II were easy enough to find, but there was scant reference to the third game in CGW or elsewhere. Later promotions seemed to focus more on relatively newer stuff such as Dark Sun or the Ravenloft-based IP which featured free roaming movement such as 1994’s Strahd’s Possession. Finally, EoB III didn’t get as big a release as its predecessors did, either. It was released on only two platforms — the IBM PC (supporting only VGA or MCGA modes with 640k) and Japan’s PC-98, completely ignoring Amiga fans though having the series end for them at EoB II might not have been too much of a bad thing.

EoB III starts off quickly — the camera focuses on a tavern (recycling part of the opening from EoB II) where a party is regaling the crowd with their exploits until a mysterious stranger arrives bearing a magic scroll. In it, he warns of a powerful lich holding sway over the ruined city of Myth Drannor and that only the party can stop him. After they agree to help, they’re whisked away into the wilderness outside of the ancient metropolis.

If the intro sounds a bit thin compared to the atmospheric meeting with Khelben that came with EoB II or the epic ending, you’ve already noticed something that a number of other players did, too. The storytelling just didn’t seem as solid or as detailed, nor was the soundtrack quite as charming without Frank Klepacki. The manual had over twenty pages of fiction to dress up the lore of what Myth Drannor was, but none of it really focused on why the party had to go to Myth Drannor at all.

Gameplay was identical to the first two  — grid-based movement, 90° turns, inching through corridors or across woodland one square at a time, a cursor to push switches or use items in conjunction with the myriad of puzzles, loot you can sift through and equip in a variety of inventory slots, and blob combat blending the actions of a party of up to six adventurers into one dangerous mass shredding whatever dares to cross their paths. One new addition, which CGW’s Scorpia had wished for with EoB II, was an “all attack” button that made everyone attack at once when they were ready making things considerably easier to manage.

It was simple stuff based on the AD&D world using its setting, classes, races, and magic memorization system (every time casters used a spell, they needed to rest a few hours to fill the spellcasting ammo clip in their heads back up). Players could roll their own four player party or import one from EoB II which was recommended if only for the sheer advantage that it gave you because of the brutal combat in the game.

Rolling a new party created leveled up characters, as they did in EoB II, to get you slightly up to speed, but sans any of the fancy stuff that you might otherwise have gotten in the previous game to help. Even though EoB III was a standalone title, having experience with the previous games was highly recommended.

The city of Myth Drannor was one super-dungeon separated into different areas as players attempted to defeat a lich and recover a valuable artifact before evil could get its hands on it. Later, however, that turned out to be a twist — the lich was actually the defender of Myth Drannor who saw the party as enemies. The dark power that was the true evil behind the city’s shadows was the man that had invited them to the city in the first place — and who turned out to be a dark god bent on conquest.

After the usual boss fight, the game’s ending finished things off with a simple congratulations from no less than another god and an invitation to join the legendary Knights of Myth Drannor. And that was it. Compared to the ending in EoB II, and even with the higher stakes, it was kind of a letdown.

EoB III also met the same fate as its predecessors. After being part of a collection released in the mid-90s, Assault on Myth Drannor and the other EoB games fell by the internet wayside as abandonware — a fate that the SSI/TSR catalog had also suffered along with the rest of their library reaching far back on through as far back as 1979.

For fans that had loved the series since Westwood’s first chapter, EoB III was still worth a shot even though some consider it the more slapdash entry into the series. It might not have been the big climax that longtime fans had waited for, at least presentation-wise, but it did bring a kind of closure that heroes of the Forgotten Realms could appreciate.

One response to “Boxart from the past, games of yesteryear – AD&D: Eye of the Beholder III”