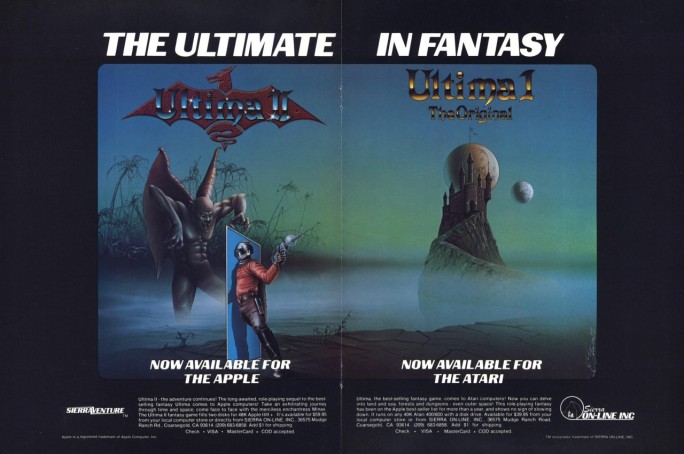 Is that…a phaser in your hand? If it’s Ultima II, the answer would be a big yes. This is also a neat ad combining the cover art from Sierra On-Line’s re-release of Ultima I with Ultima II’s. The box art for Ultima I was also used as the back of the box for Ultima II and listed things you could do in the game such as “Be pursued by KGB agents”, “Burglarize Merchants”, and “Meet prominent people within the computer industry”.

Mondain, as evil as he was, had an apprentice. In this case, an enchantress by the name of Minax. And after offing him in Ultima I, she’s understandably upset.

But she’s learned her lessons well, and in secret, and in the years since has amassed vast power and evil so great that she had managed to manipulate the end of the world on Earth in 2111. If it weren’t for the mysterious time gates, there would be no one left to try and destroy Minax. Lord British and others who have studied the disaster have concluded that her death would reverse the cataclysm and by facing her at her castle, Shadowguard, you could bring this to pass. So you’re sent to the distant past where the game starts, in 1423 BC, to begin piecing together what you need — and to grind up enough power to stop Minax.

Ultima II, initially released in 1982 for the Apple II, took a radical step from the first game by taking place on Earth itself — the cloth map (a first for the series and the beginning of a long Ultima tradition) included with the game shows a world linked together by the time gates allowing the player to visit different eras. Where sci-fi elements were brought into play in small ways with the first game, Ultima II bursts at the seams with them both with its setting and all of the other things in-between from space travel to phasers.

According to Richard “Lord British” Garriott’s own note in the manual, it took him 14 months and the help of a small team made up of ‘friends and colleagues’ to build the game which was far larger in scope than the first one. It was also programmed in assembly making it “the first assembly language program” that he had ever written according to a “tell all” article for Computer Gaming World in 1988. After his experience working with Ken Arnold on Ultima I in which he only knew BASIC and Ken used machine code for the tiles, Garriott decided that was how he wanted to code for the sequel to make it even bigger than before.

Ultima II still used the mechanics of the first game — tile-based, top down perspective and movement, key letter commands, wire frame dungeons, lots of monsters to kill — and expanded the world with the use of time gates and travel into outer space. Did you know that Jupiter has a dungeon? Towns have also gotten larger, breaking away from the single-screen that they used to occupy in the last game.

Players needed to travel back and forth in time to find everything needed for the final battle whether it was getting the most powerful sword to stealing a spaceship. But the game also allowed the player to buy up hit points from Lord British if they had the gold, raising them to Final Fantasy levels before Final Fantasy made it fashionable. We’re talking thousands of hit points, even beyond 9000. At the Hotel California (one of many real-life references/easter eggs tucked away in the game), the clerk there could magically improve your core stats with a little coin, too, and you actually needed all of it with some of the things the game could throw at you later. Ultima II was a CRPG that wanted you to be a walking god and enjoy everything that came with it.

It could also be a sandbox sized grind with a largely empty world. This is a place where the player, as long as they had enough food, could run across Asia like the Flash in a fraction of the time that Genghis Khan spent in getting out of his yurt in the morning. But compared to other sandbox games today, it was as vacant as the steppes that the Horde had mercilessly marched across centuries ago.

Experience drops and gold grinding were meager enough to make combat dull in the short term — getting to that pinnacle of awesome required a lot of patience, even with a frigate cruising the world and blowing away monsters conveniently gathering on the coast of Europe. This was one of those CRPGs where grind was king — and where it literally filled in most of the play time. At the time, however, it was amazing in offering up a world spanning experience coupled with a time hopping, space wandering premise that asked for players’ imaginations to fill in the blanks.

The game was also notable for being a solo adventure like the first. No party, unlike Sir-Tech’s Wizardry series which had reached its own sequel as well by 1982; just one hero based on whatever race, sex, and class you decided on. It was also interesting to note that Ultima II, unlike Ultima I, had also opted to distinguish between the sexes via stat bonuses — male characters got a +5 to strength while Female characters would get a +10 to Charisma.

The game was initially published by a then-young Sierra On-Line as part of their “SierraVenture” label on multiple disks.  For the Apple II release, as one example, it came on three 5.24″ floppies — the program master, the player disk, and the galactic disk which contained the world. Since players needed a disk to save their character’s progress on, the manual urged making a copy of the player disk but not of the others, one for every character you want to use. Thus:

“So, copy the Player Master a million times if you like, but, take heed, DO NOT ATTEMPT TO COPY THE MASTER PROGRAM DISK OR THE GALACTIC DISK! If you do, the orcs and thieves and even demons and balrons will escape from the universe of Ultima into your real universe and scare you at night and other horrible things and, besides, Lord British won’t like you.”

Back then, piracy was as easy as copying that floppy and everyone knew it. Colorful prose like this was often inserted to try and ask players to nicely respect their purchase years before the rise of lawyer vetted EULAs. When it was ported to other systems, the Apple-centric instructions were replaced with a bit more seriousness removing the above and simply going with the usual “unauthorized copying” notice in the back.

The game was released initially on the Apple II, but eventually found its way to many other systems from the popular Commodore 64 to IBM PCs running DOS over the next few years. It, like many of the classic Ultimas, would also find their way into several collections released over the years. Today, you can snag it for a few bucks off of Good Old Games along with I and III which come with it.

Despite its shortcomings today, Ultima II was a notable CRPG offering up a vast, open world and a bizarre storyline blending together sci-fi elements (which would be stripped out of the series’ later games) in with traditional fantasy RPG ones while building on the strengths of the first game. Worlds no longer had to be colorless and flat places with geography reserved only for wargames. Nor did towns and castles need to be only one screen in size. It was colossal, it was fun, and it would be the last Ultima that Sierra On-Line would publish. Richard Garriott and his team would go on to found Origin Systems after that pushing ahead with Ultima III — and into other worlds of adventure.

One response to “From the pages of the past, games of yesteryear – Ultima II: The Revenge of the Enchantress”