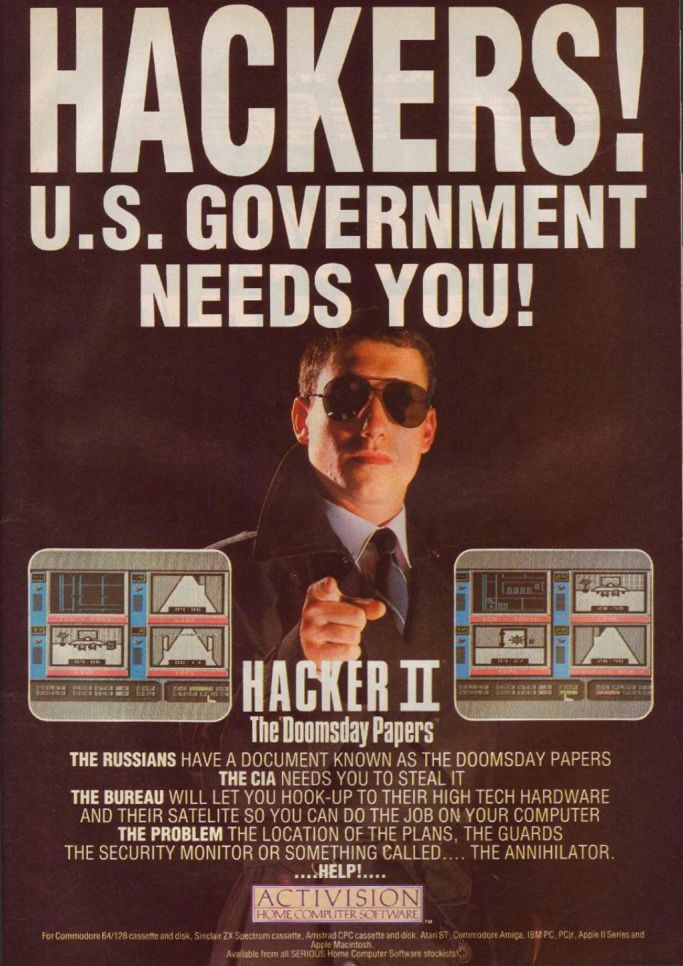 Honeypot? Or clever recruitment tactic? In Hacker II, it was a little of both. This 1986 ad does a decent job showing off what the actual game looks like (those video monitor unit screens are all that you would get for the whole game) and in telling you what it was about.

The sequel to 1985’s Hacker from Activision was grounded in a bit more reality. The last game had speedy, underground robots that traversed the world in seconds with a dastardly, mustache twirling plot to drill into the Earth’s mantle by an unscrupulous corporation determined to rule the world. But it also touched, however lightly, on the idea of “hacking” into a system and stumbling on a big, nasty secret. It was also daring in giving the player absolutely nothing to go on to get started on the game. No manual, no hints, nothing at all except a card you could mail in for actual hints on how to play the game.

Hacker II was also robust in the documentation department with one of the more immersive collection of “feelies” that a game of its type came with in trying to pass itself off as a fictional sim on breaking into a system and penetrating the security of a remote installation. It didn’t do a bad job, but like the last game, there was actually very little pretend hacking to be done.

This time around, players were contacted by the US Government to infiltrate a Soviet installation using four covertlyplanted robots — all remotely controlled from the computer interface they would supply you with. Your goal was to break into a vault at the heart of the facility by recovering and assembling pieces of the combination scattered throughout the building while avoiding patrols and cameras, all to recover a dangerous document that the Russians have which could bring down the United States. Because of how well you pulled things off in the last game, you have just become their go-to hacker for this job.

The difficulty in this game was, at least to me, a bit more forgiving than the last one thanks to having much more at my fingertips to help stave off disaster than the random chance the last game predicated a few of its challenges on.

You don’t see this kind of lavish treatment anymore from most retail games today outside of Collector’s Editions. This is what the disk versions were often packaged with. There was also a cassette version.

Documentation included a faux-manual on the four-way monitor system that acted as the interface filled with techno-babble, diagrams, and other jargon that would also be used as part of the copy protection. There was even manila envelope that read Top Secret which contained the documentation such as the manual for the Multi-function Switching Matrix VMU, that you can see in the pic along with a door sign that read “Hacker On Board”. A disk labeled “Actisource” was actually the game itself disguised as a fictional attempt at breaking into a “hotline” BBS for games.

Gameplay involved juggling views via the four-way monitor system by tracking your tread-wheeled drones, or “Mobile Remote Units”, using the cameras in the building you’re tapped into. You can also swap between sections of the overhead map to track the cameras you’re using as well who might be in the next room or hallway and may also have to fiddle with the V-hold to keep the picture from flipping like an old television set.

At the same time, you can also record footage and loop it into the cameras to hide the movement of your MRUs, taking care to match the time index so as not to raise suspicion, as they search rooms for the combination pieces. Or to follow guards around on their rounds to plan out how best to move your ‘bots into places they shouldn’t belong. If the alarm is raised, all hell literally breaks loose as the “Annihilator” is sent out to compress your MRU into a pancake of steel and circuitry if it catches up. Once they’re all gone, it’s game over until next time. Like the first game, there was no save or checkpoint system.

After punching in the code to the vault and grabbing the docs, getting out isn’t the end thanks to a surprise waiting for you outside. The building you’re breaking into isn’t actually what you think it is — it’s not even in the Soviet Union — and the docs you’re stealing have nothing to do with threatening world peace. It seems that a former Magma employee, pissed at what you did in the last game to destroy their efforts to take over the world, has tricked you into breaking into a top secret US facility and making out with something that he can use to sell to the highest bidder. But to keep the ruse going and catch the guy, you’ll need to plant new evidence in the vault which means going back in. If you pulled things off, you get a pic of your trusty drone on a faux cover of Rolling Stone.

This is a tough game that demands a lot from players but is closer to the kind of covert, real-time action that’s more at home in an espionage adventure than a hacking game. I made it out of the building with alarms going off, dodging the Annihilator, with only one MRU to spare when I finished it after many, many metal crunching failures.

Hacker II was ported to a wide variety of platforms like its predecessor covering platforms from the Amiga and Apple II PCs to the Commodore 64 and the trusty ZX Spectrum. While it and its predecessor would crop up in a compilation in the late 90s, it wouldn’t be back for digital distribution and later be regarded as something along the lines of abandonware.

While it and the first game weren’t so much about hacking, they were among the few games at the time that focused almost exclusively on being the guy “behind the scenes” armed with a trusty keyboard with which to save the world. In later years, the “heroic hacker” would find himself starring in other titles from Looking Glass’ System Shock nearly ten years later in ’94 to those that came much closer to the kind of “Hollywood hacking” seen in films such as Introversion’s Uplink or exoSyphen’s Blue Sky Hacker series.

A solid challenge and an interesting fictional take on the technical side of espionage than the kind of war dialing and cracking that went on across BBSes at the time, Hacker II was a decent successor packed in with the kind of immersive extras that games today no longer do — unless you opt for a Collector’s Edition. It was also the last game in Activision’s Hacker “series”. But if you think you can do better than that guy you see in films splicing into videos to aid his team into doing whatever they need to do from behind the safety of a computer screen, Hacker II doesn’t do a half-bad job in cramming that onto your screen.

3 responses to “From the pages of the past, ads of yesteryear – Hacker II: The Doomsday Papers”